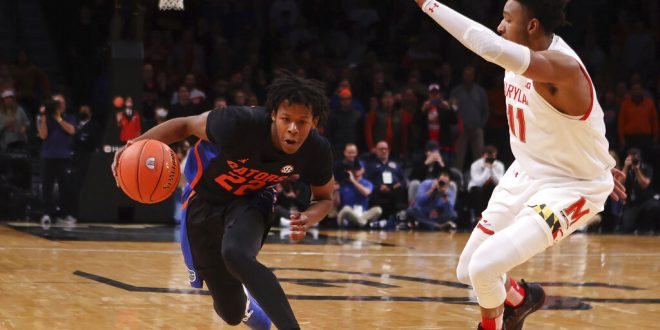 Florida's Tyree Appleby (22) makes a move away from Maryland's Xavier Green (11) during the second half of an NCAA college basketball game Sunday, Dec. 12, 2021, in New York. (AP Photo/Jason DeCrow)

The Florida men’s basketball team looks to turn things around Saturday when it hosts Oklahoma State in the SEC/Big 12 Shootout.  But they will have to do it without now two post players as Colin Castleton continues to be out with an injury and it was announced that fellow post player Jason Jitoboh was lost for the season after suffering an injury to his eye in the road loss to Tennessee.

Leave the Past in the Past

Regardless of how the statistics look, Florida has put their all into these past few games. The Gators played Tennessee tough on Wednesday, and the players say they will continue to fight hard all season long.

Florida coach Mike White has been on the hot seat, at least for some fans, because of some up and down play.  White says despite adversity, his group will keep on playing hard.

Saturday afternoon, Oklahoma State comes to the O’Connell Center, a team that has also been up and down on the offensive end of the floor but they do have a win against one of the best teams in the country in the Baylor Bears and they play in a very competitive Big 12.  Statistically, the Gators have the edge in many categories, especially scoring 10 more points per game.