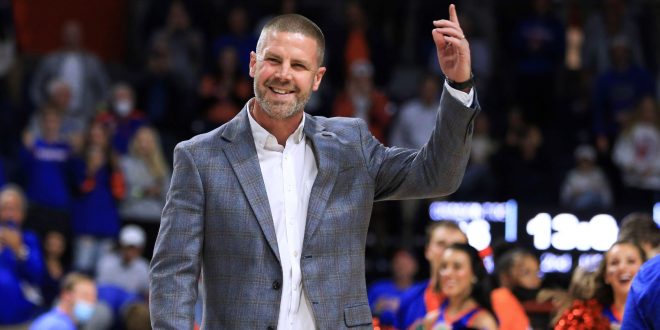 Signing Day is Wednesday and Billy Napier and his army are looking to finish their transition recruiting class in a big way.

The Gators’ new head coach has assembled a staff that is over 50 people strong for this sole purpose. Napier wants to recruit at the highest level at Florida and knows it takes an army to do so.

Heading into Signing Day, the Gators’ class is currently ranked 26th in the 247Sports composite rankings. The Gators have 15 total commits, seven of which are four stars. So far, the Gators do not have a five-star commit in their class.

However, a big day on Wednesday can change that and the Gators are in a good position to make a splash. Here is a look at how the Gators can turn this transition class into a win for the program.

It Starts On Tuesday

Two big prospects the Gators are in on are announcing their decisions on Tuesday. It could be the start of a rush of recruits signing with Florida right at the very end.

The first is Jack Pyburn, who is a three-start EDGE from The Bolles School in Jacksonville. Pyburn is the 36th ranked EDGE in the country and the 55th ranked player in the state of Florida.

He pushed back his announcement from Monday to Tuesday as he mulled his offers. Pyburn was in Gainesville over the weekend and received an offer from the Gators after a successful visit.

The Gators are facing off against Auburn and Miami in the battle for Pyburn and the Tigers seem to be their biggest threat. However, his decision to push back his decision seems to bode well for the Gators, who have put the full-court press on at the end here. He will make his decision official on CBS Sports at 3:30 p.m. Tuesday.

However, things started slow for the Gators as four-star DJ Allen committed to TCU. Allen is from Texas and is the 39th ranked receiver in the country and 40th ranked player in Texas.

Allen’s recruitment came down to TCU and the Gators at the end but Florida faced a stiff challenge. He was in Gainesville over the weekend, but Florida apparently did not make a good enough final impression.

After missing on Allen, Florida will need to get some momentum back by getting Pyburn.

Florida And LSU Battle It Out

Florida’s biggest rival on Signing Day will be the LSU Tigers as the two will battle it for some major prospects.

Leading off is the top uncommitted prospect left according to 247, Harold Perkins. He is the eighth-ranked player in the country and the second-ranked linebacker. He recently backed off a commitment to Texas A&M after just 22 days.

Perkins was in Gainesville on January 14th and backed off his commitment about a week later. LSU received the coveted last visit and now the battle for Perkins seems to be between the Gators and Tigers.

Announcement details for the Top247's No. 1 LB in five-star Harold Perkins. His mother talks about the process and the finalists #Florida #LSU and the #Aggies in the story linked here: https://t.co/qv4rY3q1wx pic.twitter.com/fb6rMzYseG

Blake Alderman of 247Sports was recently on Sports Scene with Steve Russell and discussed where Perkins’ recruitment stands.

His announcement will take place at 2:15 p.m. on Wednesday.

The other major battle between the two schools is for Jacoby Matthews, who is a four-star safety out of Louisiana. His recruitment is an intense three-way battle between Florida, LSU and Texas A&M.

Matthews visited the Gators two weeks ago and was in Aggieland for his final visit this past weekend. The signs point to Matthews landing with A&M, but all three schools are still highly involved. Whoever lands his signature is getting the second-ranked safety in the country and the 38th-ranked player overall.

Fans will have to wait for Matthews’ decision as he is scheduled to announce at 7 p.m. Wednesday.

Yet another battle between LSU and Florida will take center stage on Wednesday. This time it is for TreVonte’ Citizen, a four-star running back out of Louisiana, who is the eighth-ranked running back in the country.

Citizen took an unofficial visit to Florida and the Gators have had the full-court press on for him late in his recruitment. He visited Miami this weekend and Auburn is also involved, but Florida and LSU are the main contenders.

He will make his announcement at noon on Wednesday.

Finally, the Gators and Tigers face off for three-star wideout Caleb Douglas. He was in Gainesville two weeks ago before heading to LSU for his final visit, but confidence is high for Napier and his staff.

His announcement will take place at 2 p.m. on Wednesday.

Elsewhere, there is still a ton of action left for Florida on National Signing Day with four more uncommitted players making announcements.

The first and perhaps biggest name outside a Florida-LSU battle is Caden Story, a four-star defensive lineman from Alabama. This one is coming down to the Gators and another Tigers, this time the ones from Clemson.

The story has long been a Clemson lean and they had all the momentum, but the Gators made a late push to secure his final visit. Confidence on 247Sports is heavy on Clemson, but this one again comes down to whether the Gators left a strong enough final impression or not.

Story’s announcement will take place at 10 a.m. on Wednesday.

Florida is in a west-coast battle with Oregon for three-star wide receiver Arlis Boardingham out of California. He traded visits between the Gators and Ducks this past month and it sets up a showdown between the two. Currently, 247’s prediction has him heading to Gainesville, but a decision time is unknown.

Finally, a pair of offensive line targets have decisions to announce and could have big implications on each other. First, three-star Jalen Farmer out of Georgia will make his announcement at 9 a.m on Signing Day. Farmer has visited Florida, Auburn, Mississippi State and Alabama all within the last two weeks as he mulls his decision.

His final visit was to Alabama and now it seems to be a battle between the Tide and the Gators for his signature and his decision could have a big impact on where fellow three-start Matthew McCoy ends up.

McCoy is from St Augustine and this is an in-state battle as Florida, Miami and UCF are all involved. McCoy has yet to schedule a time for his announcement.

Depending on how Signing Day goes, Billy Napier could have his first big win at Florida on Wednesday. However, pressure on Napier will increase heading into his first full class in 2023 if it goes south.

Ethan Budowsky is a fifth-year telecommunications student at the University of Florida. He covers Major League Baseball for Just Baseball Media and previously covered the Miami Marlins for their SB Nation affiliate, Fish Stripes.
@ethanbudowsky
Previous Alabama looks to match intensity versus top-ranked Auburn
Next Tom Brady announces his retirement