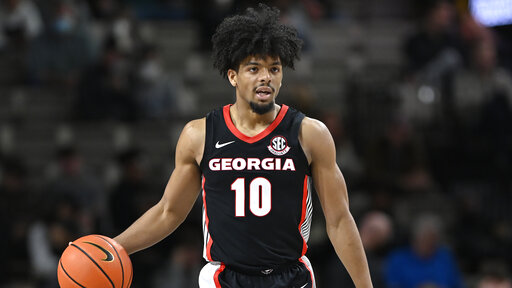 In a battle between two unranked teams, the Arkansas Razorbacks (16-5) will visit the Georgia Bulldogs (6-15) at Stegeman Coliseum Wednesday night. The game will tip off at 7:00 p.m.

The Georgia Bulldogs sit in last place in the SEC. An upset win over the Alabama Crimson Tide (14-8) on Jan. 25 is the team’s only victory in its last 10 games.

Tom Crean’s squad will enter its matchup against Arkansas hoping to repeat the success it had against Alabama. During that game, four players scored in double figures and the Bulldogs made out with an 82-76 win. In that game, senior guard Aaron Cook led the way with 15 points.

Dawg Nation was a DIFFERENCE MAKER last week vs. Alabama. Let’s do it again tomorrow night at 7 when ⁦@UGABasketball⁩ faces Arkansas ! pic.twitter.com/diuJND1ooV

Crean will hope for a turnaround as questions mount. Following a tenure at Indiana which saw him lead the team to three Sweet Sixteen appearances, the Bulldogs have missed the NCAA Tournament in each of Crean’s first three seasons at the helm. This year, his team has surpassed its loss total from the 2020-21 campaign, and Crean’s job security may be in danger.

The Arkansas Razorbacks sit at fourth in the SEC, having won six straight games. The team will hope to extend its streak as it travels to Athens tonight.

The Razorbacks have been led by senior guard JD Notae, who is averaging 18.8 points per game on 42.6% shooting. Notae has scored at least 15 points in every game since the team’s Dec. 18 loss to Hofstra. He had 15 again during last week’s Big 12/SEC Showdown slate against West Virginia, but fellow senior guard Au’Diese Toney led the team with 19 points. Notae, a Covington, Georgia native, will play tonight’s game an hour away from his hometown.

After missing out on a chance to qualify for the NCAA Tournament after the 2019-20 season was canceled due to the COVID-19 pandemic, Eric Musselman’s Razorbacks clawed their way to the Elite Eight last season. Musselman previously coached at Nevada, where he led the team to a Sweet Sixteen appearance in 2018.

Arkansas' JD Notae has quietly been as consistent as any guard in the SEC this season. Averaging 18.6 PPG during the Razorbacks' current six-game winning streak. At Georgia on Wednesday.

Previous Spring Training In Jeopardy as MLB Lockout Continues
Next Vanderbilt takes on the Kentucky Wildcats in an SEC matchup.