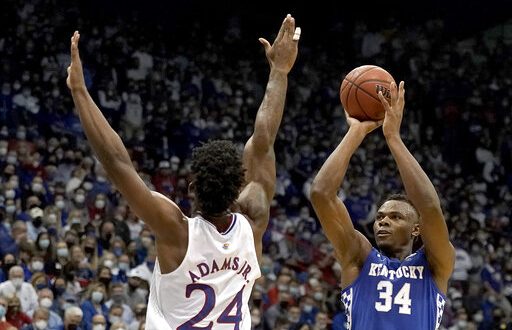 Vanderbilt takes on the Kentucky Wildcats in an SEC matchup.

Vanderbilt travels to Lexington to take on the Kentucky Wildcats in an SEC matchup. Vanderbilt is hoping to ride the wave of its win verse the Georgia Bulldogs to propel against the Wildcats.

In the game against the Bulldogs,  Scotty Pippen Jr. led the way with 23 points and nine assists. Jordan Wright added 15 points, five rebounds and three assists to the effort. Pippen Jr. leads the team in points per game with 18.8.

On the other side, the Wildcats are coming off of back-to-back wins after playing the Mississippi Bulldogs and the then ranked No. 5 Kansas Jayhawks, in the SEC/BIG12 Challenge. In the route against the Jayhawks, Keion Brooks Jr. was scorching hot and scored 27 points and had eight rebounds. Oscar Tshiebwe added 15 points and 14 rebounds to the assist. Tshiebwe leads the country in rebounds per game with 15.1 and had a 28-rebound-performance earlier in the year against Western Kentucky.

In the last matchup between the Commodores and Wildcats, Tshiebwe lit up the score board with 30 points and 13 rebounds for Kentucky, in the 78-66 victory on the road. Pippen Jr. came to play as well and scored 32 points and added four assists in the loss.

Kentucky has jumped seven spots from No. 12 to No. 5 in the newest Associated Press poll and are sitting in second place in the SEC. The Wildcats are only trailing No. 1 Auburn in the SEC standings. Vanderbilt sits unranked in the AP poll and 11th in the SEC.

A win Wednesday for the Wildcats would be their 11th straight against the Commodores.

Kentucky has been battling injuries all year long, and that will continue going into this game as Daimion Collins is listed as “questionable” with an undisclosed injury he suffered late January. CJ Fredrick is still out indefinitely with a lower body injury suffered in November.

For Vanderbilt, Center, Liam Robbins looks to be out for the Commodores with a foot injury