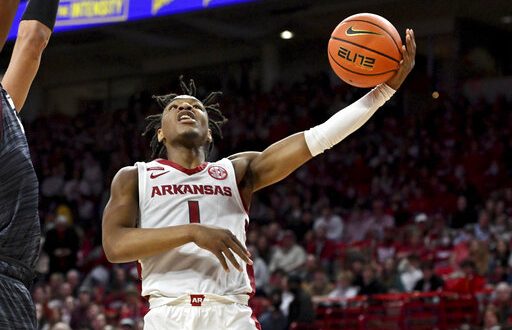 Arkansas will tip off vs Mississippi St. Saturday night at 8:30 p.m. in a key SEC basketball matchup. This will be the second time these teams face off with Mississippi St. coming away with the win 81-68 earlier this season.

Arkansas comes into this matchup off of a win against Georgia defeating the bulldogs 99 – 73 where guards Stanley Umude and JD Notae scored a combined 54 points. Umude led the team with 31 points and a FG% of 60% While this will be the second time these teams meet it will be the first that Notae takes the court versus the Bulldogs, missing the first time these two teams met. The Razorbacks are currently on a seven game win streak and hope to extend it into the weekend.

Mississippi St. comes into the matchup off of a win vs South Carolina 78-64. In that matchup Garrison Brooks and Iverson Molinar led the bulldogs in scoring combining for 38 points. Molinar finished the game against the Gamecocks with 20 points and shooting for 50% FG%. He  currently leads the team in scoring and assists.  The Bulldogs hope to sweep the Razorbacks and bring their wins to two in a row.

Previously when these teams met back in December the Razorbacks kept up with the Bulldogs through the first half. However entering the third quarter the Bulldogs never let the Razorbacks back into the game. Not allowing Arkansas to take the lead after the half. Leading the teams were Umude for Arkansas and Tolu Smith for Mississippi St.

While both teams sit unranked at the national level this game will be  key in the SEC standing. With Mississippi St. one game behind the Razorbacks and Arkansas sitting at the number three spot in the conference.  Both teams entered the tournament last year with Arkansas reaching the semi-finals and losing to LSU. With Mississippi St. reaching the quarter finals and falling short versus the SEC basketball champions in Alabama.

With both of these teams ranked in the top five of the SEC standings, this could is big for not only conference tournament seeding, but could play a role in these teams NCAA Tournament resume. Make sure to check back to WRUF to see continued coverage of SEC Basketball.