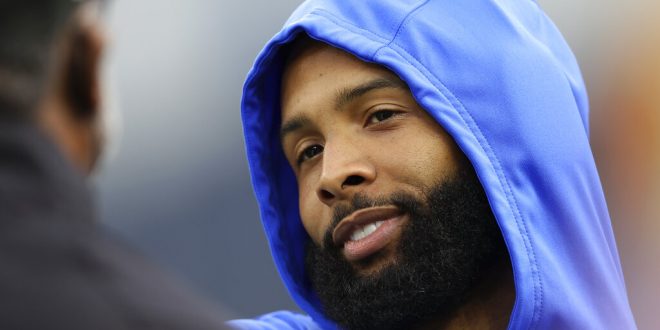 Odell Beckham Jr. has waited a eight years for this moment.

In 2014, the LSU product was selected No. 12 overall by the New York Giants, quickly rising to NFL stardom. Emphatically, the receiver saw three-straight 1300+ yard seasons in New York, including a jaw-dropping touchdown catch v. the Cowboys in 2014 which put the league on notice.

Yet, after an ankle injury in 2017, the All-Pro took longer to bounce back than Giants brass would’ve hoped. With career lows in 2018, the Giants then shipped ‘OBJ’ off to Cleveland via trade. However, the pairing with Rookie of the Year winner Baker Mayfield never materialized. In two-and-a-half seasons with the Browns, Beckham only posted seven touchdowns and 1,586 yards, a far cry from his first three seasons. All hope seemed lost with the once surefire superstar, until a team out west came calling.

Beckham was released by the Browns in November. After considering signing with Green Bay, he received a phone call from Rams defensive back Jalen Ramsey. Notably, the All-Pro gave the phone to receivers Cooper Kupp and Robert Woods, asking if they’d like to play alongside the former pro bowler. With an emphatic yes from both men, OBJ signed with the Rams. And the rest is history, as the Rams will play in Super Bowl LVI Sunday.

Through the turmoil, his former teammates are happy to see him reach football’s greatest game.

In November, the Rams announced No. 2 receiver Robert Woods would miss the remainder of the season due to a torn ACL. With the news, the hole quickly became plugged with Beckham. Since joining the Rams, he has posted 541 yards six touchdowns, one shy of his total with the Browns. While Kupp’s MVP-caliber season overshadows OBJ’s efforts, he still has been an integral part of the Super Bowl run as he has quickly assimilated to Los Angeles.

When Beckham joined the Rams, he added to a list of former Pro Bowl players. Von Miller, Matthew Stafford, Kupp, Andrew Whitworth, Eric Weddle, Ramsey and Aaron Donald have all been named Pro Bowlers or All-Pro’s before. With OBJ joining the star-studded roster, coach Sean McVay has maximized the loaded squad. Beckham, along with his other teammates, know there’s a reason they’ve made it this far.

Evidently, Beckham has always been one of the larger personalities in the league. However, his time in Cleveland was physically and mentally straining on the former All-Pro. So, it’s imperative his next destination be a proper fit. Certainly, Los Angeles fit the bill.

All in all, the Rams are one game away from the Lombardi Trophy and OBJ has been a large part of the run. With the game Sunday, he knows the task at hand.

Super Bowl LVI is Sunday, February 13, at 6:30 p.m from SoFi Stadium in Los Angeles. The broadcast will be on NBC, with Al Michaels and Chris Collinsworth on the call.

Sam Petosa is a Journalism major pursuing a Specialization in Sports and Media at UF. The South Florida native produces daily shows for WRUF, including "Sport Scene with Steve Russell, and "The Tailgate." In addition, Sam provides weekly sports updates for WUFT News and radio Sportscenter's for WRUF radio. Sam has been a writer at ESPN Gainesville since January 2020.
@sampetosa5
Previous Doug Pederson talks Jaguars hire
Next Bronson Basketball team dedicates season to Mahki Bostic