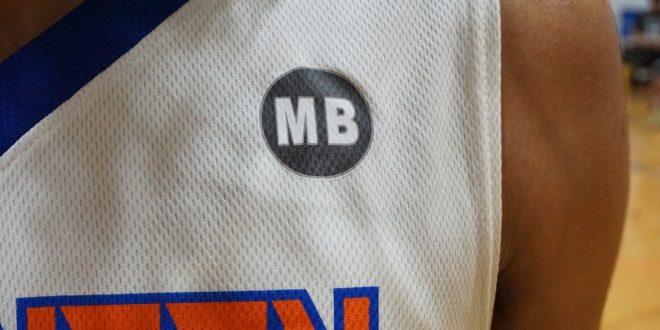 Throughout this season, Bronson Basketball has had a new patch on their jerseys in memoriam of their late teammate. The initials MB can be seen on the jersey to honor former player Mahki Bostic.

Not just a community but a family

Bronson is a very small community with a population of around 1,000. Due to its size, Bronson has become a very tight-knit community where every face is familiar. The Bronson basketball team players Jesse Williams III, Anuery Montero, Jeythian Merced, Jahziel Freeman, Dylan Homan and Mahki Bostic have all played with each other since middle school.

Head coach Billy McCall has had a longstanding relationship with his team. McCall coached all of the players above in middle school and now is coaching them as high schoolers.

One of his players on that middle school team was Mahki Bostic, who he had grown close to along with the rest of the team. In an interview, McCall shared what Mahki was like as a person.

“Oh gosh, he was fun-loving, very carefree, very respectful, no issues, and well mannered. His mom did an outstanding job of raising him.”

Mahki Bostic tragically passed away in a car accident at age 18 on August 2, 2021.

Prior to the 2021-2022 season, the Bronson Eagles chose to honor Bostic by dedicating their season to him and including his initials, MB, on their jerseys.

“Going into this season, it was something that we no hesitation wanted to dedicate the season to him. And it just felt right to get the memorial patch put on on jerseys in his honor going into the season,” said McCall.

Eagles Captain Jesse Williams, who has been a standout player this year, shared how close he was to Bostic.

“Me and Mahki had been friends since first grade, and we ended up being like brothers growing up. Even though he ended up going to Newberry Highschool, he still lived in Bronson, and we played at the park and played basketball. As a person, he always had a smile and was really funny and great at basketball.”

Williams recalled the night he found out about the tragedy.

“I had like a bunch of miss calls and texts, so I called his mom. She said it was true, and I was in shock. I couldn’t believe it.”

To honor his friend Mahki Bostic, Jesse Williams got a tattoo on his arm of his name.

This season the Eagles have overcome tremendous adversity on and off the court. In an interview McCall spoke about how his team has overcome adversity.

The Bronson Basketball team has persevered and come together through this emotional season not only as a team but as a community . During this season, the Eagles have soared, reaching a record of 15-9 and currently ranked 11th in the state in Class 1A.z.

The Eagles and Williams are ready for the upcoming playoffs and still have Bostic in their thoughts during preparation.

“We want to go all the way to state, and if we do win, it is for him,” said Williams.

Preparing for the playoffs

This week before the playoffs, the Eagles have practiced hard and studied film in preparation to face both Chiefland and Newberry high school.

Coach McCall shared his key focus in advancing through the district playoffs.

“We have to stay composed when we face adversity, and we have to execute on offense and defense, and we should come out on top.”

Throughout the season, Bronson has always bounced back. The Eagles started this season with a 5-8 record before rattling off a nine-game winning streak that was only halted by Newberry high school.

“Our whole season is for Mahki, and we send our love and condolences to his family,” said Williams.

If the Eagles get past Chiefland on Monday, they will have another matchup with Newberry. It will be a heartfelt game as Bostic played for both teams throughout high school.

If the Eagles win, they will play Newberry on Tuesday, Feb 8.