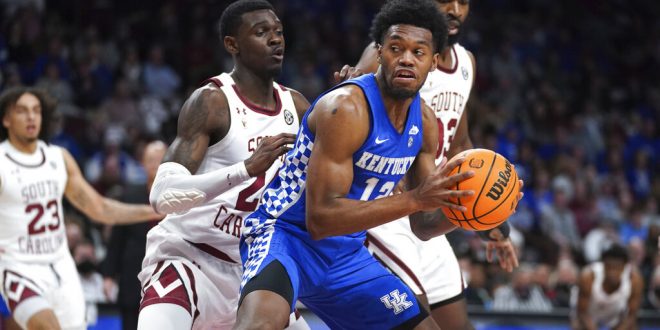 Despite losing an 11-point lead, No. 5 Kentucky held off South Carolina 86-76 to win their fifth-straight game Tuesday night. Six different Wildcats scored in double-figures including four of the five starters.

Got the win. See you Saturday at Rupp, #BBN. pic.twitter.com/nNpKQWV74F

Forward Oscar Tshiebwe led the way with 18 points, 14 rebounds and three blocks. Tuesday’s game was his sixth-straight game with a double-double and his 18th overall this season. Tshiebwe leads the team with 15.9 points per game and leads the nation with 15.1 rebounds per game.

The Wildcats led 39-28 late in the first half courtesy of eight-straight points from Jacob Toppin. Toppin finished the game with 10 points off of the bench, but missed the second half after an ankle injury.

From there, South Carolina went on a 6-0 run to end the half and carried the momentum into the second. With a 9-4 run, the Gamecocks tied the game 43-43, but were never able to gain the lead.

South Carolina’s Keyshawn Bryant led the Gamecocks with 18 points and 14 rebounds and kept them in the game.

Additionally, Jermaine Couisnard added 17 points and five assists off the bench for the Gamecocks.

Second-half momentum carried the Wildcats behind a 15-2 run and early fast-break opportunities.

Kentucky guard TyTy Washington Jr. led the way in the second half by scoring 12 of his 14 points. Arguably Washington’s biggest plays came after South Carolina tied it when he either scored or assisted on Kentucky’s next three scores, including an alley-oop assist to Keion Brooks Jr. Brooks finished with 15 points and nine rebounds.

5-0 run for the Cats. pic.twitter.com/gAqI9WndKI

From there, guard Kellen Grady completely shifted momentum with a steal and dunk to put the Wildcats up by six early in the second half. Grady also scored in double figures with 12 points of his own.

Guard Davion Mintz added 10 points off the bench, including a late three-pointer to put Kentucky up by 14 points.

South Carolina was able to cut the lead to seven, but late free throws gave Kentucky the 10-point win.

Meanwhile, South Carolina looks to get back in the win-column as they host Georgia (6-17, 1-9 SEC) on Saturday at 2 p.m.

Cam is a fourth-year broadcast journalism sports and media major at the University of Florida. In addition to writing and recording radio trendings for WRUF, Cam covers North Florida HS football for The Prep Zone and Mainstreet Daily News and UF football and basketball for Inside the Gators.
Previous Mississippi State and Tennessee Battle For Seeding in SEC Matchup
Next Magic Defeat Trail Blazers, Get 13th Win of Season 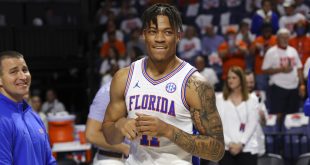