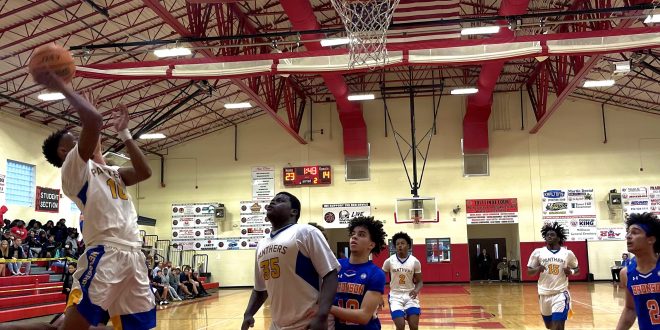 Michael Moore elevates for a layup in the second quarter. Photo by Gabriela Vitale.

By: Bradley Shimel and Gabriela Vitale

On Tuesday night, the Newberry High School Boys’ Basketball team defeated Bronson High School in the 1A District 7 semifinals and will advance to the District Championship for the first time since the 06-07 season.

Between an aggressive defensive scheme leading to numerous turnovers and physical performances in the post from Reggie White and Perrion Sylvester, the Newberry Panthers proved why they’re ranked as the top seed in the district. While this team is loaded with senior leadership, tonight’s game was dominated by Michael Moore (junior) and Reggie White (sophomore).

Michael Moore, who has led the team in scoring, finished with 17 points in Tuesday’s district semifinal game. Reggie White finished with 15 points, with 12 of them coming in the second half.

While the usual theme this season has been scoring in variety, Newberry’s 56 points came from only six players in this game. In addition to Moore and White, Perrion Sylvester and Lennie Boykin combined for 16 points, with most of them coming from within the paint.

In the last matchup between these two district foes, the score at the end of the first quarter was 22-13. This was not the case in this game, as Newberry’s aggressive trap defense led to few points for a Bronson offense that continuously turned the ball over.

Michael Moore scored seven of his 17 points in the first quarter, along with a few more buckets from Perrion Sylvester and Lennie Boykin.

At the conclusion of the first quarter, the score was 13-7 in favor of Newberry.

As the second quarter got underway, Newberry’s aggressive defense continued as more forced turnovers resulted in transition points. After Perrion Sylvester scored his second basket of the quarter, Bronson called a timeout with 5:47 remaining in the half.

While Bronson tried to combat this lethal defensive scheme by spreading the ball around, this failed more times than not as cross-court passes were often intercepted or sailed out-of-bounds.

On offense, Newberry scored 17 points in this quarter, with Perrion Sylvester and Lennie Boykin accounting for 12 of them. After a buzzer-beater three-pointer from Michael Moore, the score at the half was 30-17 in favor of the Panthers.

Adversity Hits Late in the Third

For most of the third quarter, the script of this game did not change much. The Newberry Panthers continued to force turnovers and score points as a result. With 4:31 remaining in the quarter, Bronson called another timeout.

Reggie White gets the rebound from Michael Moore. Newberry remains in the lead. #Newberry #Bronson pic.twitter.com/k4pR85sxMy

After this stoppage in play, the Bronson Eagles began to settle into a groove. Jesse Williams III and Aneury Montero, both dual-sport athletes, made plays when it mattered most for their team and forced a few turnovers that resulted in points for the Eagles. At the end of the third quarter, the score was 39-34 in favor of Newberry.

White Puts it on Ice

As the final quarter got underway, the Bronson crowd in attendance began to make some noise. After a Jeythian Merced three-pointer, the score was 42-39 in favor of Newberry, and the Bronson crowd broke out in a deafening “Let’s Go Eagles” chant.

Michael Moore answered right back with a three-pointer of his own, and an official timeout immediately followed. During this stoppage, head coach Patrick Green urged his team to sprint back on defense and take care of the basketball.

While Reggie White is still an underclassman, he played at an elite level in Tuesday night’s win-or-go-home game, especially when it mattered most down the stretch. White scored seven consecutive points to put Newberry up by 13 points. After a strong take to the hoop, while being fouled, Reggie hit a free throw that all but put this game out of reach with only 1:44 remaining. At the end of the game, the final score was 56-44.

After the game, White called Tuesday night’s victory “a dream come true” and praised the offense for attacking the boards and getting to the rack. White added that the team can look to improve when it comes to limiting turnovers and shooting the ball.

.@ReggieWhite0 shares a few words after #NewberryHighSchool advances to the 1A District 7 Championship.

The sophomore forward finished with 15 points tonight, with 12 of them coming in the second half. @ESPNGainesville pic.twitter.com/FsvzGjNL1E

The Newberry Panthers will face the Trenton Tigers in the 1A District 7 Championship on Friday, Feb. 11 at 7 p.m. The game will take place at Williston High School and the Panthers would advance to the regional playoffs with a win.