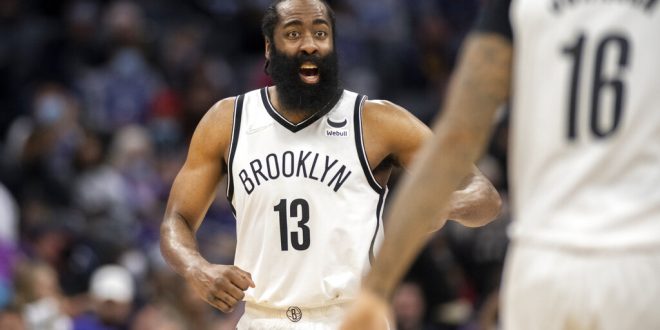 Will James Harden Be On the Move?

In Jan. of 2021, the Brooklyn Nets made a blockbuster move to acquire one of the best players in the NBA. Brooklyn acquired James Harden from the Houston Rockets in exchange for three first round picks, four pick swaps and both Jarrett Allen and Caris LeVert. The trade allowed three of the most skilled players in the league to play on the same team, with Harden and Kyrie Irving in the backcourt along with Kevin Durant in the frontcourt.

The hope was to have all three players contribute to Brooklyn’s first ever NBA championship. The team came up just short last season, falling to the Milwaukee Bucks in seven games in the Eastern Conference Semifinals. With high expectations to start the season, the Nets looked like on of the best teams in the East despite the absence of Kyrie Irving. However, the team has lost nine straight games and Harden could be suiting up for a different team after the trade deadline Thursday.

Could a Trade Happen?

With Harden being a free-agent at the end of this season, it would only make sense for the Nets to try and move the veteran guard. In return, the Nets may want to look for someone who can compliment Irving and Durant, but maybe not with another scoring dominant player. The Nets need a player who’s OK with sharing the basketball and is comfortable with being the third option. With Durant, Irving and Harden on the court at the same time, Harden isn’t the first option and he wants to be on a team where he can be the most dominant scorer.

Where Would Harden Go?

So far, the only destination analysts have Harden going to is the Philadelphia 76ers. If a trade between the two teams happen, Ben Simmons would be going to Brooklyn. According to ESPN analyst Brian Windhorst, the Sixers have been trying to free up roster space for Harden, including looking to move Tobias Harris.

If Harden ends up being moved to the Sixers, Philadelphia would solve its problem with Simmons and become a real threat in the East. A Harden and Embid team up could push the 76ers to the next level, with scoring  coming from both the inside and the outside more consistently. Embid has been doing everything he can for Philadelphia this year. He’s averaging 33 minutes per game this season, the most in his career, so bringing Harden in can reduce the load off Embid’s back and allow the Sixers to possibly get past the second round.

For the Nets, Simmons could ultimately benefit from being in Brooklyn. Although he hasn’t play this season, fans figure he still has his shooting problem, but he’s a pass first player. Combine that with the scoring ability of Durant and Irving, the Nets could be back to living up to expectations.

However, Windhorst said that the Nets asking price may be too high, as they are looking for Simmons along with two or three other players and draft picks.