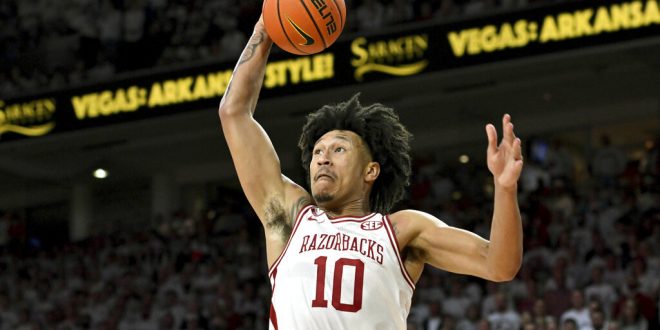 Arkansas forward Jaylin Williams (10) goes up for the dunk against Auburn during the first half of an NCAA college basketball game Tuesday, Feb. 8, 2022, in Fayetteville, Ark. (AP Photo/Michael Woods)

It was a career night from Jaden Shackelford on Wednesday as the Alabama Crimson Tide guard put up a career-high 30 points and eight three-pointers in a 97-83 win over the Ole Miss Rebels.

The Crimson Tide took the first blow in the game. After falling early, Alabama found itself down 30-19 midway through the first half.

However, in just under six minutes, the Tide came storming back and took the lead off a Shackelford layup. Shackelford scored 15 points, including four threes, in the final nine minutes of the opening half.

By the break, Alabama had gone up by double-digits, and they didn’t look back. The Crimson Tide ran away with the game, stretching their lead over the Rebels as far as 17-points.

‘Anything you can do, I can do better’

It was clear from the tip that the Wednesday night matchup between Alabama and Ole Miss was a battle between each team’s star guards. It was Jarkel Joiner for Ole Miss versus Shackelford for Alabama.

The two exchanged buckets throughout the game and both finished with new career highs. Shackelford made a career-high eight of the Tide’s 14 three-pointers on the way to a 30-point night. He made eight of his 13 shots from beyond the arc and 10 of 17 from the floor.

Joiner shot 60% from the field and buried six threes of his own. He outscored Shackelford by tallying 33 points, but the Crimson Tide got the win and closed out the contest with a 97-83 win over Ole Miss.

The Tide move to 15-9 on the season and sit at No. 7 in the SEC standings. After a promising win over LSU, the Rebels dropped their second straight game. They fell to a 12-12 record and are No. 13 in the conference, just ahead of last-place Georgia.

What’s Next For Alabama and Ole Miss?

The Ole Miss Rebels will travel to Missouri to take on the Tigers on Saturday while Alabama will host the Arkansas Razorbacks.

Chris Will is a second-year journalism student with a focus in sports and media. Originally from the Fort Lauderdale area, Will is now the beat reporter for Florida Gymnastics and covers all things sports in Gainesville.
@_Chris_Will_
Previous Williston Loses Heartbreaker to Trenton in District Boy’s Hoops Semifinal
Next Buchholz Falls to Fleming Island in District Semi-final 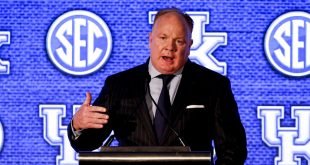 After head coaches from Arkansas, Florida and Georgia took the stage to answer questions from …