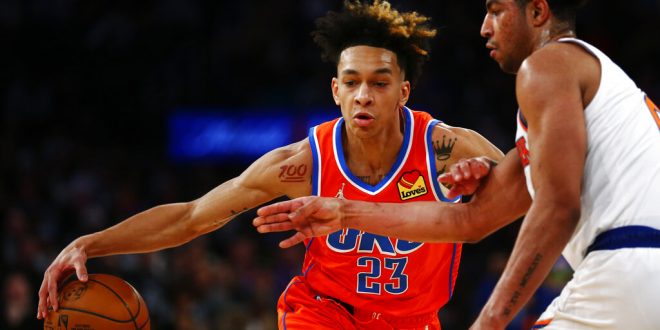 Gators In The NBA

The Florida Men’s Basketball team has produced some serious talent over the years.

Gainesville has been home to NBA champions, All-Stars and promising rookies. Here’s a list of seven former Gators who are currently in the NBA.

The Washington Wizards’ guard underwent season-ending surgery on his left wrist on Feb. 10. He got injured in the third quarter of the Jan. 29 115-95 loss to the Memphis Grizzlies.

Beal was one of the Wizard’s leading players this season averaging 23.2 points and 6.6 assists per game in 40 starts. He was selected as the third overall pick of the 2012 NBA Draft by the Wizards and became the main guy in Washington since.

In 37 games at Florida, Beal averaged 14.8 points and 6.7 rebounds. He was also named to the First-Team All-SEC and received the SEC Freshman of the Year award six times.

Mann is having a breakout year in his rookie season with the Oklahoma City Thunder.

In his sophomore season at Florida, Mann led the Gators in points and assists per game with 16 and 3.5 respectively. He was second in rebounds with 5.6 behind Colin Castleton.

Horford is one of the more experienced Gators in the NBA having played for 14 seasons. The 35-year-old center is averaging 10 points and 7.5 rebounds in 49 games with the Boston Celtics.

The five-time All-Star has proved essential in the Celtics’ 33-25 season. He’s second in blocks per game with 1.3 and is third in rebounds.

Horford was picked as the third overall pick of the 2007 NBA Draft by the Atlanta Hawks. He was a member of the Gators’ back-to-back National Championships squads.

Finney-Smith is having a career year in 2022.

The 28-year-old is averaging 10 points and 4.8 rebounds per game while helping the playoff-hopeful Mavericks to a 33-24 record. His season-high is 23 points, which he scored against the Minnesota Timberwolves on Dec. 19. In six years with Dallas, Finney-Smith’s averaged 7.9 points and 4.6 assists.

Although he went undrafted in 2016, Finney-Smith put up respectable numbers with the Gators. His best season was in 2015-16 when he averaged 14.7 points and 8.3 rebounds per game. He scored 1,220 points in three seasons in Gainesville.

After going undrafted in the 2018 NBA Draft, Chiozza has had stints with the Rockets, Wizards and the Nets.

Chiozza is still finding his way to consistency. This time, with the Golden State Warriors. He’s averaging 2.1 points and 1.8 assists in 26 games this year. His only start of the season came against the Toronto Raptors on Dec. 18, where he played 26 minutes and scored three points.

He played with the Gators from 2014 to 2018. He became the Gators’ all-time assists leader with 571 and averaged 7.4 points in his four seasons.

The Hornets’ shooting guard has played in only two games this season. In 22 games with the Greensboro Swarm, the Hornet’s G-League affiliate, Lewis has averaged 12 points and 3.1 rebounds per game.

Along with Mann, Lewis got drafted as the 26th pick in the second round of the 2021 Draft. He averaged 8.2 points and 3.4 rebounds per game in two seasons in Gainesville.

Haslem has played over 800 games for the Miami Heat in 19 seasons. He has averaged 7.5 points and 6.7 rebounds per game and won three NBA Championships. However, Haslem has played in 31 games since the start of the 2017-18 season, which has turned him into a leader rather than a role player.

In 2022, Haslem has seen action in nine games, where he has averaged three points and two rebounds. At Florida, Haslem played a total of 130 games and finished his career with 99 consecutive starts. He totaled 1781 points and 831 rebounds.

As the college basketball season rolls on and a good recruiting class on the horizon, we could see more Gators in the NBA soon.