The Florida Gator softball team crossed home plate 13 times to blow out the Jacksonville Dolphins 13-1 in a five inning game to move to 5-0 on the young season.  The Gators rallied up 13 hits within the five innings.

And That's the Ballgame‼️ #GoGators

See you Wednesday for our Home Opener at 6 PM vs. the Dolphins!

The Gators put themselves on the board right off the bat in the first inning. Skylar Wallace hit a sacrifice fly to score Kendra Falby to give the Gators a 1-0 lead.  In the third inning, Charla Echols plated two with a single to put the score at 3-0 and the inning ended with Reagan Walsh singling to score two more runs to give the Gators a 5-0 lead.

In the fourth, Florida went right to work offensively.  They loaded the bases and scored a run when Wallace was hit by a pitch.  Echols singled again for another RBI and the bases were loaded once again.  Walsh stepped to the plate and hit a grand slam home run to put the game out of reach for the Dolphins.  Avery Goelz also homered for Florida as they plated eight runs in the inning.

T4 | @ReaganWalsh17 sends a laser screaming over the center field wall for a GRAND SLAM! #GoGators

Natalie Lugo got the start in the circle for the Gators and pitched four innings, striking out four while limiting the Dolphins to three hits. After that, Marissa Mesiemore entered the circle to relieve Lugo in the fifth and the graduate transfer closed out the game for the Gators, allowing one run.

The Gators will have their home opener against Jacksonville on Wednesday.

Parker Welch is a Senior at the University of Florida majoring in Sports Media at the College of Journalism & Communications.
@parkerrwelch
Previous Gators In The NBA
Next Providence Girl’s Soccer Takes Down P.K. Yonge to Advance to State Semifinal 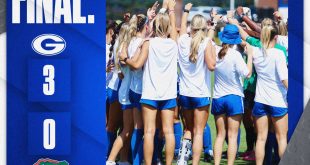 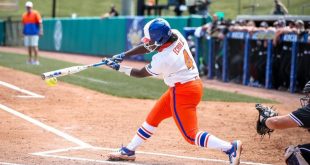