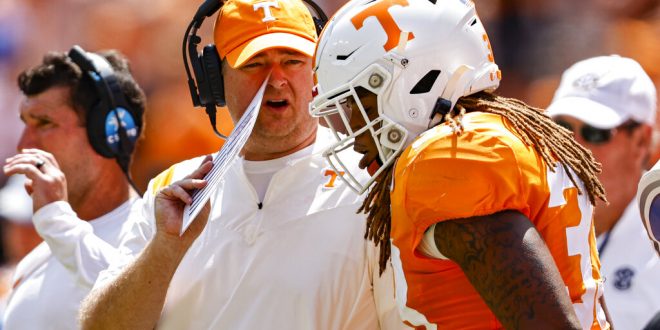 Tennessee head coach Josh Heupel talks to linebacker Jeremy Banks (33) after he was called for unnecessary roughness during the first half of an NCAA college football game against Pittsburgh, Saturday, Sept. 11, 2021, in Knoxville, Tenn. (AP Photo/Wade Payne)

According to ABC20, this is the first year that the award has been named after Steve Spurrier. The award ceremony was held at Spurrier’s Gridiron Grille on Monday, Feb. 21.

Heupel reflects on the meaning of winning this award, especially with the award being named after Coach Spurrier.

A Knight to a Vol

Previously, Heupel was the head coach at the University of Central Florida from 2018-2020. During his time at UCF, he recorded 28 wins. Heupel’s team went undefeated in the regular season in his first season as the Knights’ head coach.

Moving to the SEC, Heupel was placed in difficult circumstances as Tennessee was under investigation for NCAA violations. In the midst of the difficulty, Heupel’s team recorded seven wins in his first year. According to Sports Illustrated, the investigation ended in Nov. of 2021 with Tennessee self-imposing penalties that were not specified. However, they did not have to self-impose their bowl game.

Anytime there is a turnover for coaching staffs, players leave and there are some recruits who chose to decommit. Add an investigation into the mix, and it can be a fearful process for some football programs.

However, Heupel has his eyes set on building a firm foundation. The mindset for success from his athletes and coaches is evident, he says. He also highlights the growth of his players on and off of the field.

In addition to the investigation within Tennessee, there outside factors that are influencing the college football industry. These factors include NIL and the transfer portal.

Josh Heupel is a veteran when it comes to adapting and he knows how to do it well as shown by his track record as a head coach.