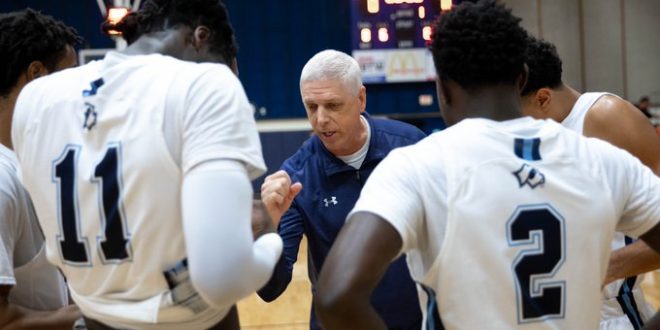 Head coach Chris Mowry of the Santa Fe Saints basketball team talks to his team in huddle in the middle of a game during the 2021-2022 season. Mowry looks to guide his team to a conference title. Photo Credits: Santa Fe Saints Men's Basketball Twitter @SFsaintsMBB

Santa Fe College is coming off an overtime win against St. Petersburg College on Saturday. With the win, they remain atop the Central Conference with a record of 11-3 in conference and 23-5 overall. This win moved the team to a perfect 15-0 on their home court this season. It also marked Head Coach Chris Mowry’s 400th all-time win as a head coach in collegiate basketball.

Tonight, the team travels to Polk State College for the final game of their regular season. A win tonight will secure the Saints their first Central Conference title in 10 years.

Keys to the game for Santa Fe

Ahead of their game, Mowry says the keys to beating Polk State are getting back defensively, limiting Polk State’s fast break opportunities and working to get quality looks on offense. The team will look to guards Bradley Douglas and Hasan Abdul-Hakim to continue to score big in this game as they have been throughout the season. Mowry pointed out just how athletic this Polk State team is when asked about what his team should expect during the game tonight.

Not only will beating Polk State get the Saints their first Central Conference title in 10 years, it will also automatically qualify them for post-season play. There are three conferences in junior college in Florida and eight teams go to the State of Florida Tournament. The top two teams from each conference automatically qualify along with two of the three third place teams.

Mowry said that, heading into this season, the Central Conference Title was not heavily discussed. Even as their season progressed, they did not focus on post-season play. He made it clear to his team that their focus should be on getting better each day. It seems like keeping their attention on the next game ahead of them worked for the team as they have improved drastically from last season when they finished 6-10 in conference play.

Tipoff for their game tonight vs. Polk State is scheduled for 7:00 p.m. in Winter Haven, Fla. 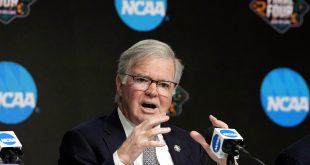 On Friday, NCAA president Mark Emmert joined Sports Scene and provided his insight into the …