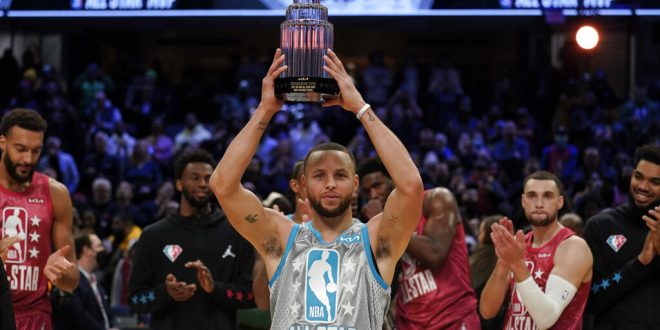 Stephen Curry of the Golden State Warriors is the NBA All-Star Game MVP. After scoring 50 points and a record-breaking 16 three-pointers, Curry helped secure the victory 163-160 for team LeBron over team Durant on Sunday evening in Ohio. This will be his first time receiving the award after playing eight All-Star games, and marks the first year of a new trophy design. This year the trophy is in honor of Kobe Bryant, giving even more meaning to the award.

Curry and James Harden were quite the dynamic duo on Sunday. Curry won the MVP and Harden came in strong in the final moments of the game hitting the winning bucket. This is their fifth consecutive victory with Harden as team captain, and comes as no surprise with their line-up. James, Curry, Giannis Antetokounmpo and Nikola Jokic were among the greats playing for team Lebron. The opposing team, Kevin Durant, was at a disadvantage with their team captain sidelined due to an injury. Joel Embiid shined scoring a team high of 36 points. He hit 14 of 20 from the floor and 5 of 8 from three-point range, along with 10 rebounds and four assists.

Halftime made quite the show with 75 of the top players in NBA history recognized on the court. With Curry backstage, he was gearing up to make history himself. Over the span of two minutes in the third quarter Curry hit five consecutive three-pointers. The more he was heating up, the more boos he would invite from the Cleveland Cavalier fans. But the NBA star didn’t let that stop him, actually he enjoyed it.

Previous Undefeated Gators Softball on the Road to UNF
Next Vanderbilt Men’s Basketball Aims to Defeat No. 24 Alabama

The NBA Free Agency period began Thursday, shaking up the league with many NBA players …