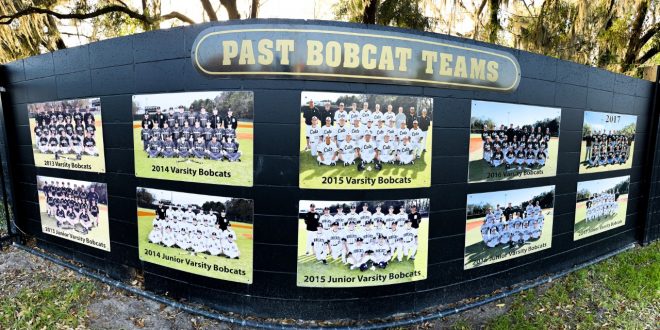 Buchholz Bobcats Look Ahead to a New Start

By: Gabriela Vitale and Ellie Shreve

The Buchholz high school varsity baseball team is on the right path to an impressive 2022 season. Last year, the Bobcats fell short in the first round of the FHSAA 6A playoffs and finished the season with a 18-7-1 record on the year (6-3 in district play). Head Coach Ron Brooks will be entering his 12th season leading the Bobcats.

Stars on the Lookout

The Bobcats have a variety of young talent led by their only senior, Ty Robertson.

Robertson is a left-handed pitcher who looks to lead by example this spring being the only fourth-year player on the team, he is also committed to Hillsborough Community College.

The Buchholz Varsity Baseball team has their season opener against the Lincoln Trojans on Thursday. Here is Buchholz Senior Ty Robertson with his thoughts entering the season. @Bobcat_Baseball pic.twitter.com/m91R05ynY9

Buchholz sophomore Anthony Wilkie also shines atop the pitcher’s mound. Wilkie is a righty who is committed to Clemson University. He had a 1.50 earned run average last year and hopes to lead the Bobcats to the state playoffs this season.

Buchholz Varsity Baseball is back in action! Buchholz Sophomore and Clemson commit Anthony Wilkie comments on the start of the season and his commitment from the Fall. @Bobcat_Baseball pic.twitter.com/eMJkrxhtHG

Behind the plate is sophomore catcher, Noah Hayse. Hayes committed to the University of Central Florida last January and was the standout at the plate last season leading his team with a .387 batting average.

Hayse looks to continue to showcase his dominance both behind and at the plate this year and bring his team to a championship run.

A Look Back to Last Season

The Bobcats lost eight seniors last year due to eligibility and welcome four new freshmen to the team. Buchholz started off 5-1-1 in their first seven games last season that set themselves up for a successful regular season.

Buchholz Varsity Baseball falls to Columbia 11-2 in their first Pre-Season game. The Bobcats will travel to Suwannee for a second Pre-Season game tonight at 7 p.m. 😸⚾️@Bobcat_Baseball pic.twitter.com/zv4g5lehWN

The Bobcats stood their ground against their rival, Gainesville high school, shutting them out 12-0 which started their five-game win streak that led them into the playoffs.

Buchholz had a slow start in their first playoff game against Lincoln but rallied in the sixth inning scoring four runs to take the lead and win 4-2. They went off to face Chiles in the district championship but fell short of the win, putting them at second place in the district 2 6A standings. They had another chance to prove themselves in the first round of the FHSAA 6A playoffs, but couldn’t hold onto their lead after the fourth inning. The Bobcats finished the season with a 18-7-1 record.

The Buchholz Bobcats had two preseason games on Feb. 9 and 10 and will look to the regular season when they host Tallahassee Lincoln in their opening game.

The Bobcats look to stay on top of the Trojans as they defeated them last season in the first round of playoffs. Five games into the season, Buchholz will be challenged against the only team that shut them out last season, the Chiles Timberwolves. The Bobcats will play rival Gainesville high school back to back nights on April 14 and 15. The regular season will wrap up at Oakleaf on April 28 and the Bobcats will strive to make the impressive playoff run they have been working towards.

There’s a New Mascot in Town

A blue-eyed Australian Shepherd by the name of Luna has stepped up to the plate as the Bobcats’ next mascot. With a combination of midnight black and gold-tinted fur, the puppy represents Buchholz varsity baseball with pride. Luna can be found winding between the pitchers’ feet, dodging between baseballs, and munching on grass at every practice.