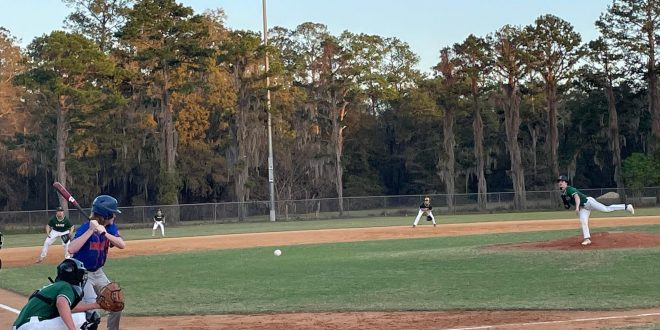 Eastside Baseball Takes Their First Win of the Season at Home

Eastside’s baseball season kicked off on Tuesday night at their home field against the Bronson Eagles. Last season, the Rams had an overall record of 2-16. While the team looks to improve its record this year, the team roster experienced significant changes as the majority of the team graduated last year. The current Rams team is predominately freshmen and sophomores who never played a game before. Even so, the Rams managed to beat the Eagles 6-3 and boosted the confidence of the young team.

Both teams struggled to find their momentum in the first inning. The first two batters for the Eagles were out early in the game. While the Eagles continuously made an effort to get a hit, they did get on base from three walks caused by the Rams’ pitcher – Junior Miles Archer. Meanwhile, the Rams junior Maui Schwartz got to the third base, but the Rams struck out before he could make it home.

The Rams and the Eagles remained scoreless even in the second inning. Both teams were out with their fourth batter. The Eagles had quick two strikes out with their first two batters. While Bronson sophomore Caleb Engler had a long hit and got to second base, junior Justin Cohoon grounded out before Engler could score. On the other hand, the Rams only reached first base in this inning. After two innings, the Rams and the Eagles were tied at 0-0.

The Eagles’ batters had solid hits in the third, but the Rams’ defense was organized and reacted promptly. The Rams caused three consecutive outs and the Eagles did not even manage to get to first base. In the bottom inning, Rams sophomore Nick Eichel smacked a triple. Followed by the efforts of junior Thomas Shay, Eichel scored the run for the Rams. By the end of the third, Rams led 1-0.

Defensive efforts were key to the Rams’ energy in the fourth. The first three batters for the Eagles had strong solid hits. However, the focused Rams’ defense caused an important fly-out, then a ground out for the Eagles. Bronson freshman Zachary McClelland was close to scoring as he got to the third. Ultimately, it was the Rams’ pitcher – Archer who caused a strikeout before the Eagles could score. Archer’s harder and more accurate pitches were also detrimental to the Rams’ offensive stops in the top third.

In the bottom third inning, the Eagles switched their pitcher to senior Jacob Kahn. He scrambled to find the momentum for his pitches throughout the whole inning. Kahn pitched four walks and allowed the Rams’ batters to get to base easily. Supplemented by several powerful hits, the Rams scored five runs to end the inning. The Rams’ lead was extended to 6-0.

The Eagles Fight Till the End

No team scored in the fifth inning and both teams were out with four batters. In the sixth inning, the Eagles had consecutive hits which sent three of their batters to the bases. Bronson freshman Peyton Lake and Junior Jerimiah Lindly each had a run that gave the first two runs for the Eagles, ending the sixth inning at 6-2. The Eagles fought until the end in the seventh inning and scored 1 more point. However, the Rams held on and prevented the Eagles from catching up. Eventually, the game ended at 6-3.

After the game, the Rams’ leadoff batter and pitcher, Archer, and Head Coach Sean Dobbs reflected on the teams’ performance and praised the new team members for playing their first game with high energy. Both of them acknowledged that there is a lot of room for improvement, but they are glad to take home their first win of the season with this young team.

What’s Next for the Rams

The Eastside Rams will play their second game of the season against the Gainesville High School Hurricanes on their home field on Thursday at 6 p.m. The Hurricanes lost their first game of the season at home 6-3 against P.K Yonge Monday night. With the young Eastside team gaining confidence from their first win, the Rams will look to continue their season strong and hope for another win this Thursday.