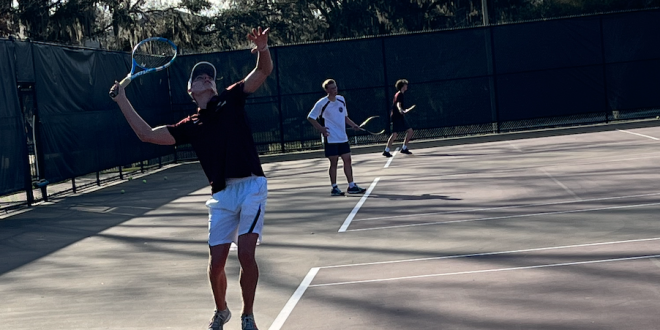 The Oak Hall boy’s tennis team defeated the Santa Fe Raiders in dominant fashion Thursday afternoon. The Eagles secured a 6-1 victory with the team’s five wins in their singles matches playing a key role in their strong performance.

The Eagles wasted no time in their singles matches. Not only did they win all but one of their matches; they also won most of them in decisive fashion. Andrew Powell and Ayden Gallogly only gave up two sets each, while Grant Powell won every set in his match.

The Eagles’ only loss on Thursday was a respectable effort as well. Anish Veerapaneni fell short in his singles match by a score of 8-4.

Andrew Powell is proving he’s not just a force to be reckoned with on the basketball court. He secured an 8-2 win in his match over Thomas Dupree. Oak Hall boy’s tennis is having a good day so far, as they’ve won their first three matches against the Santa Fe Raiders. pic.twitter.com/jn2wNX1dTo

Andrew Powell credited his success to keeping the ball in play and avoiding too many mistakes. He also talked about how his powerful serves made a noticeable difference in his singles match.

“My first [type of] serve was what I was trying to utilize the most,” Powell said. “My first serve is all out. I try to use my legs… it’s more of a full-body movement.”

Finishing the Job in Doubles

After their hot start in singles, the Eagles’ momentum carried over to their doubles matches. Grant Powell and Veerapaneni formed one pair, while Andrew Powell and Gallogly made up the other duo. Additionally, Spencer Fuhr teamed up with Rory Glynn in an unofficial match; Fuhr and Glynn’s match was not included in the final score.

Grant Powell continued his impressive day in doubles, while Veerapaneni was able to bounce back from his earlier loss. The pair secured an 8-4 victory to put Oak Hall in the driver’s seat to win the match.

Andrew Powell and Gallogly dominated in their doubles match. The duo walked away with an 8-0 win as each of them improved to 2-0 on their matches for the day. Gallogly attributes the duo’s commanding victory to focusing on one shot at a time and staying patient.

“In doubles, you want to be more team-focused. You don’t want to go for every single ball that you can,” Gallogly said. “Aggression at the net is good to have, but you only really want to take one if you know you’ve got one.”

The Eagles topped off a successful day with one final (albeit unofficial) victory. Fuhr and Glynn staved off a comeback from their opponents to take an 8-6 win in their doubles match.

On Deck for the Eagles

Thursday’s win pushes the Eagles to a 2-1 record on the season. The Eagles will now get nearly a week to rest up before their next outing. They will visit the P.K. Yonge Blue Wave next Wednesday, March 2, at 2:30 p.m.

Jack Meyer is a second-year student at the University of Florida. He is majoring in Journalism and specializing in Sports and Media.
@jackmeyerespn
Previous Gator Softball Set for UCF Knights Classic
Next Columbia Softball Allows 22 Runs in Lopsided Loss to Lafayette