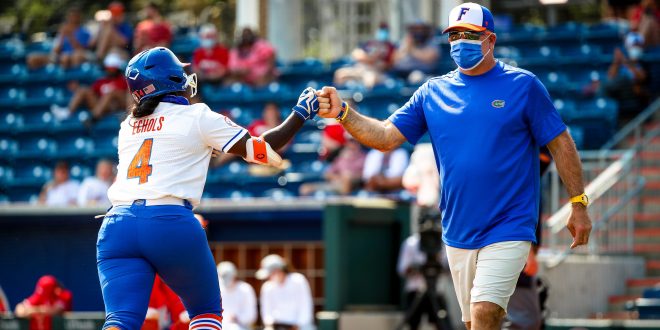 This weekend, the fourth ranked Gator softball team will be participating in the UCF Knights Classic in Orlando.  The Gators are one of the six teams in the tournament. The other teams playing this weekend include the hosting UCF Knights, Ole Miss Rebels, James Madison Dukes, DePaul Blue Demons and the Oakland Golden Grizzlies.

Each team in the UCF Knights Classic will play at least four games with some teams playing five. Multiple wins in this tournament could mean big things for all of the teams participating this weekend. Games begin at 9:30 a.m. on Friday, February 25, starting with James Madison vs. Oakland. The Florida vs. Central Florida match up on Sunday has already sold out.

The hosting UCF Knights enter its own tournament with a 7-5 record and having just fallen out of the Top 25. While the Knights’ 7-5 record may not stand out, they have already faced five ranked opponents. Two of those five ranked games were wins over the 12th ranked Georgia Bulldogs and the 11th ranked Texas Longhorns. With an opportunity to get a top five win this weekend, the Knights are looking to close the toughest part of their schedule on a high note at home.

The one team Gator softball will not be playing against is the Ole Miss Rebels. The Rebels enter the tournament at 8-3 having not played a ranked opponent to date. The Rebels’ Tate Whitley is their leading hitter at  a cool .500 on the year.  Whitley is one of the four Rebel batters to be hitting above .300 so far this season. The Rebels will take on their first ranked opponents when they face James Madison and UCF.

Quite the weekend for @hottytoddytate!

James Madison University enters tournament play with the least amount of games played in the 2022 season. JMU is 3-1 and at one point were ranked 22nd in the nation but fell out of the Top 25 due to not playing a game during the first week of play. James Madison is led at the plate by Hannah Hennessy who is batting .455 on the season. The Dukes have three other batters hitting over .300 with 10 or more at bats.

The DePaul Blue Demons could have been entering this game as one of the hottest teams in the tournament. However, despite starting 5-0, the Blue Demons have dropped their last three games. But behind the powerful bat of junior, Brooke Johnson, the Blue Demons spirits remain high. Johnson leads DePaul batting with a .455 average and has four homeruns and 12 RBIs on the season.

The team who will be traveling the farthest this weekend will be the Oakland Golden Grizzlies. Their first matchup will be against James Madison. This will also be the Golden Grizzlies first game of the season. Last season they went 26-16, coming up just short of a Horizon League Championship. Oakland is looking to capitalize on their momentum from last season and put together hopefully another championship-caliber campaign.

And last but not least, the highest ranked team in this tournament will be the fourth ranked Florida Gators. The Gators enter the UCF Knights Classic 12-0 and on a roll having already beaten two teams in the Top 25. At the plate, the Gators have been led by freshman, Kendra Falby, who is currently batting .513 on the year. In the circle, the Gators have seen some impressive pitching with the highest ERA on the team being 1.06. The Gators look to continue their hot streak this weekend and come out of Orlando still undefeated.