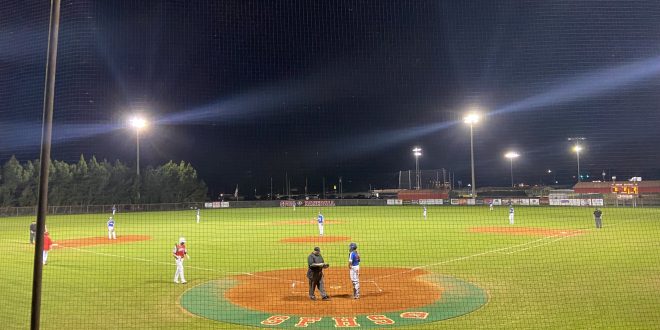 In Friday night’s high school baseball matchup between the Santa Fe Raiders and Keystone Heights Indians, the Raiders were too much for the Indians to handle. The Raiders walked away with a 3-1 victory.

The first inning was quiet with the scoreboard remaining 0-0 heading into the second inning. The bats got hot for the Raiders in the bottom of the second inning. The game was no longer was scoreless, as Raiders junior Dylan Evans stole home on a wild pitch. Santa Fe senior Devan Mitchum followed Evans around the bags with a stolen base and shortly followed it up with a run to put the Raiders up 2-0 heading into the third inning.

Battle of the Pitchers

Both Santa Fe and Keystone Heights saw stellar pitching that allowed no runs to be scored through the third inning. In the bottom of the fourth, Connor Brown advanced to first on a base hit into right field. A wild pitch from Keystone Heights pitcher Benjamin Goforth allowed Brown to steal second. With a full count, Goforth walked junior Zane Starling. Goforth escaped the fourth inning stranding both Brown and Starling on base.

The top of the fifth inning started shaky for Devan Mitchum on the mound, as he walked two Indians batters. Evans took over pitching duties for the Raiders with two outs in the fifth inning and left both Indians runners on base.

The top of the sixth brought another pitching change for the Raiders, with sophomore Conner Brown taking over for Evans after a mound visit from Head Coach Travis Yeckring. Brown closed out the top half with clean pitching, while senior Jacob Hayes bumped Santa Fe’s lead up to 3-0 in the bottom of the sixth.

Raiders Hang on for the Win

Keystone Heights made one last effort to close the gap with a run from junior Noah Branch, but the Raiders were able to hang on for the victory with outstanding pitching from Conner Brown.

Head Coach Travis Yeckring holds his team to a high standard, and they fell short of that standard against Keystone Heights. Fortunately for the Raiders, Devan Mitchum was able to hold the team together.

Moving forward, Coach Yeckring expects his players to buy into the system.

“We gotta have a good practice Monday. Hopefully we find nine guys that are bought in to do what it takes to win a baseball game and we’ll find whoever those nine guys are and we’ll be ready to play Tuesday.” – Travis Yeckring

Devan Mitchum said the Raiders must improve on hitting in next week’s matchup against the 2-0 Dunnellon Tigers.