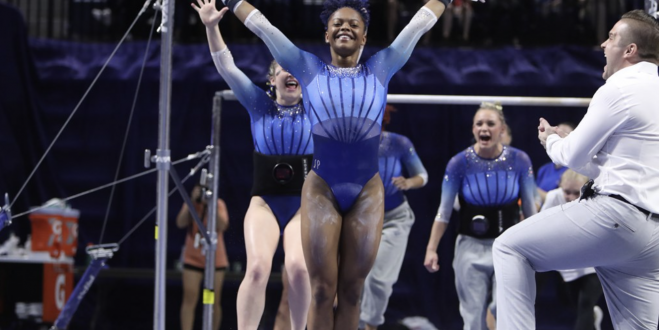 Trinity Thomas stole the show on senior night for the number three Florida Gator gymnastics team as she took at least a share of the victory in every event and posted a nation’s best in the all-around. Florida got the win in the weekend’s top meet against the number two Oklahoma Sooners 198.100-197.750.

In front of the largest crowd in Exactech Arena history, the Sooners took to the uneven bars and the Gators went to vault.

Neither team faltered as both squads put up a solid 49.400 to open up the night.

Freshman Sloane Blakely and senior Trinity Thomas led the way for Florida with a 9.925 each, a personal best for Blakely. Every score for the Gators was within 0.100 points of each other.

Oklahoma maintained similar consistency on the bars. The top bars gymnast in the country, Audrey Davis contributed a team-high 9.925 as the two teams remained level after the opening rotation.

Florida moved to bars for rotation two and put on a textbook showing on the apparatus.

Thomas, the number nine ranked bars gymnast earned a 9.950 along with graduate student Megan Skaggs. With the exception of the final routine on the event, the Gators hit and stuck each performance with four of the five qualifying scores at 9.900 or above. The Gators put together a 49.600 in rotation two.

Oklahoma fell behind slightly on vault. Sophomore Katherine LeVasseur, who is the number one vaulter in the nation, received a 9.850 on the event. Freshman Jordan Bowers and Danielle Sievers each got 9.925s to keep the meet within reach.

Oklahoma closed the gap just slightly on the floor exercise.

Bowers and junior Ragan Smith pushed Oklahoma ahead in the rotation, each scoring at 9.925. Sievers opened up her floor career with a solid 9.850 to help the Sooners put together a 49.425 performance in their third rotation.

The Gators saw some inconsistent scoring on the balance beam. The two judges were fairly separated in their scoring of each performance with three of their evaluations separated by 0.100. The Gators only put together two scores of 9.900 or above. Thomas almost got a perfect 10.0 but came up just short after one judge gave a 9.95.

Thomas Puts It Away

Florida flourished on their signature event. In the clutch, it was the experience of the seniors that took the Gators to victory.

With Oklahoma edging closer and closer on the beam, Florida needed perfection to secure the meet.

And they got it.

Thomas put the O’Dome in a frenzy when a 10.0 appeared on the scoreboard. Nya Reed also added a 9.95 and freshman Sloane Blakely closed off the night with a 9.900. Five of the Gators’ six routines were 9.900 or above.

“This team is clutch,” head coach Jenny Rowland said, “I think they’ve shown it throughout this entire season. Just the consistency, the confidence and using each week as an opportunity to learn and an opportunity to get better.”

Florida will travel to Auburn to take on the reigning Olympic All-Around champion, Sunisa Lee, and the Tigers next week while Oklahoma will host top ranked Michigan.

When it comes to what’s next for Thomas, she said a fifth year is “on the table.”

Chris Will is a second-year journalism student with a focus in sports and media. Originally from the Fort Lauderdale area, Will is now the beat reporter for Florida Gymnastics and covers all things sports in Gainesville.
@_Chris_Will_
Previous Barco and Ficarrotta Shine in 4-1 Gator Baseball Win Against Georgia State
Next Santa Fe Raiders come out on top over Keystone Heights Indians