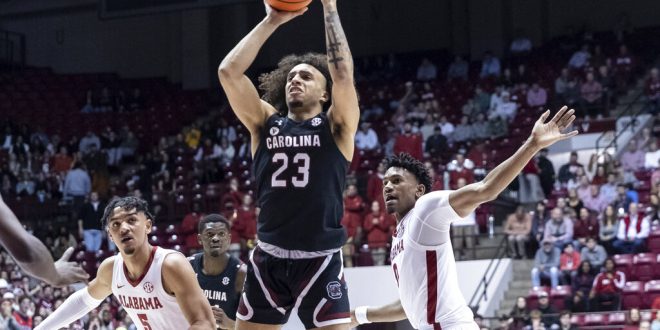 South Carolina guard Devin Carter (23) shoots a jump shot against Alabama during the first half of an NCAA college basketball game, Saturday, Feb. 26, 2022, in Tuscaloosa, Ala. (AP Photo/Vasha Hunt)

Although both teams are eliminated from SEC contention and face contrasting realities, the matchup promises to be a close game.

The Gamecocks have won four of their last five games. Their streak started on Feb.12 when they beat the Georgia Bulldogs, 80-68, and followed up with consecutive wins over Ole Miss, LSU and Mississippi State. During the stretch, the Gamecocks averaged 75 points per game and allowed 68. Despite losing to No. 24 Alabama on Feb. 26, South Carolina hopes to keep the momentum going before visiting No.5 Auburn on March 5.

Offensively, the Gamecocks rely on guards Jermaine Couisnard, Erik Stevenson and James Reese V. The trio is averaging double digits in scoring this season and have carried the team’s offense during the recent winning streak. Among SEC teams, South Carolina ranks fourth in blocks (five) and fifth in rebounds per game (38.1).

After going 16-10 with an 8-8 SEC record in 2021, the Tigers hoped for a better performance this year. The team, however, has collapsed in conference play by posting a lackluster 4-12 mark. Missouri’s four SEC wins this season were over Alabama, Texas A&M and Ole Miss, which it beat twice. The Tigers have dropped their last five games since Feb. 15’s 76-54 loss to No.14 Arkansas. Three of those losses were at home.

Despite the unimpressive mark, forward Kobe Brown has stood out against the competition. He leads the team in points and rebounds per game with 12 and eight respectively. He’s also had six games with 20 points or more this season. Missouri will try to collect a last road win before hosting SEC bottomfeeders Georgia on March 5.

Previous Tennessee vs. Georgia preview
Next Gator Men’s Basketball Escapes Nashville with a 82-78 win over Vanderbilt