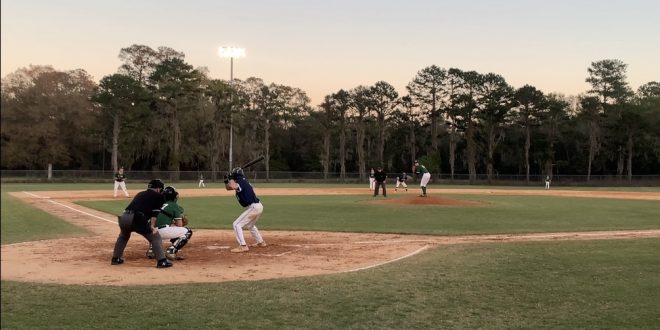 P.K. Yonge rode a six inning pitching performance from junior Aidan Mansfield and four hit efforts from seniors Kyrin Griffith and Drew Dawson to secure a 10-2 victory over the Eastside Rams Tuesday night. The Blue Wave improve to 3-0 on the young season, while Eastside drops to 1-2.

Mansfield struck out eight and did not allow a hit until the fourth inning. The southpaw faced the minimum through three innings and struck out the side in the second. The first base runner he allowed came via a walk to the Rams senior Jeff Williams, who was ultimately picked off at first base.

The Rams strung together three straight hits in the fourth inning, but were unable to break through against Mansfield, who was mixing his fastball and off speed pitches well all night.

“Adjusting between my off speed and my fastball just kept them on their toes and they weren’t able to keep up with it,” Mansfield said.

Mansfield collected a pair of hits as well and scored the first run of the game on an RBI double from Dawson. P.K. Yonge put up a three spot in the second through a two-out rally. The Blue Wave collected four consecutive hits and had RBIs from Mansfield and junior Lane Sparkman.

Drew Dawson puts the #BlueWave ahead 1-0 on a double down the left field line in the top of the 1st@ESPNGainesville pic.twitter.com/8LCdiYLCZz

Baserunning was not Eastside’s forte on this night, as they saw two runners get picked off at first. On the flip side, the Blue Wave were running rampant, picking up 11 stolen bases while capitalizing on five Eastside fielding errors.

P.K. Yonge added on three more runs in the third inning to further put the game out of reach. The Blue Wave batted around in the inning and took advantage of five stolen bases, two Eastside errors, a walk and a hit batsmen to keep the offensive wheels turning.

The Blue Wave stranded the bases loaded after junior Jacob Pridgen lined out to centerfield to end the threat. P.K. Yonge ended up leaving 13 runners on base despite plating 10 runs.

Breakthrough for The Rams

After adding on another run in the fifth inning, the Rams started to show signs of life against Mansfield, whose pitch count was climbing. Freshman Chance Mandarino and junior Maui Schwartz reached base on back-to-back hits to begin the bottom of the sixth.

Junior Miles Archer reached on the only fielding error of the night by the Blue Wave, an airmail throw to first by the second baseman. This allowed Mandarino to come around to score the first run for Eastside.

The Rams score a couple in the 6th to make it 10-2 heading to the 7th@ESPNGainesville @EHSramsbaseball pic.twitter.com/JlN9tfKi9P

Junior Thomas Shay, a 6-foot-6 first baseman, swatted a sacrifice fly to left field to drive home Schwartz to make it a 10-2 game.

Freshman Gage Riley took over for Mansfield on the mound to close out the ballgame. He retired the Rams in order on two strikeouts to secure P.K. Yonge’s third win of the season.

Following the game, Dawson emphasized on what he believed the Blue Wave did well along with what they could work on going forward.

P.K. Yonge will next take the field at home on Friday night against the 0-3 Bradford Tornadoes; Eastside’s next appearance will take place Thursday at home opposing the 2-0 St. Francis Catholic Wolves.