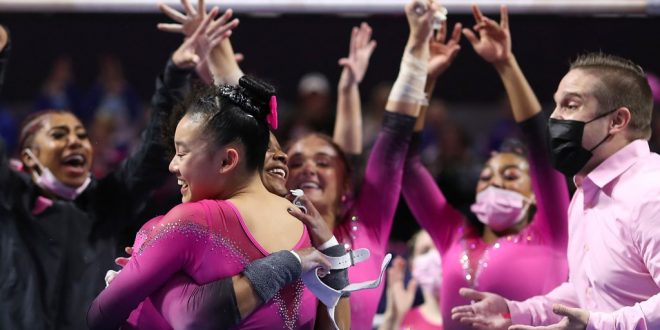 Trinity Thomas and Leanne Wong hug after Wong's 10.0 uneven bars routine. Thomas earned her third 10.0 of the season with her win on balance beam. Photo By: Courtney Culbreath

The No. 3 Gators Gymnastics team will face off against the Auburn Tigers who come in ranked No.6. The meet will take place at Auburn on Friday at 8 p.m.

Gators On A Roll

The Gators come off a big win against No. 2 Oklahoma 198.10 – 197.75 in front of a sold out crowd for the Gator’s senior night. The win came off of big performances from Gators Trinity Thomas, Sloane Blakely, Nya Reed and Megan Skaggs.

Blakely and Thomas led the team and tied for the vault title as Skaggs and Thomas shared the uneven bars title. Thomas then led the event on beam and floor scoring a perfect 10.0 on the floor.

Thomas now leads the nation with three 10.0 this season. She now has a total of 13 10.0 for her time as a Gator. Thomas also claimed at least one share of each of the five events. This was the second time in her career she achieved this. She currently leads the nation with her all-around score of 39.85. Along with this, she was named SEC gymnast of the week

Auburn comes off their highest scoring meet in program history beating Kentucky 197.925-197.150. The Tigers started off slow at the meet however finished strong and were able to come out with the win.

Auburn was led by, Olympic All-Around gold medalist, Sunisa Lee as she scored her second perfect 10.0 of her collegiate career on beam. This made Lee the first Tiger to score a 10.0 in multiple events. With her first 10.0 coming at the bars event. She is also the reigning SEC freshman of the week.

Along with this, the Tigers set school records on both bars and floor.

This matchup will be a key meet to setup who will have a chance to hold the SEC title.