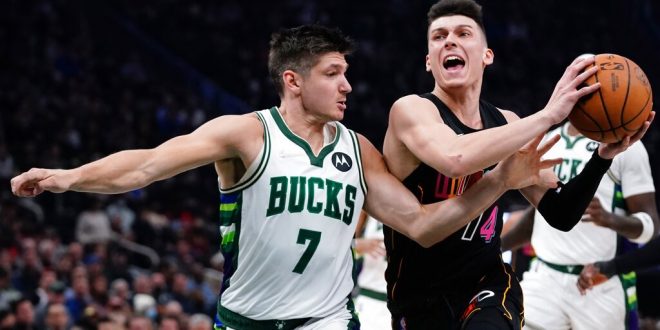 Down by 14 with just six minutes left in an NBA game is typically a done deal for the side that’s up. But on Wednesday, the Milwaukee Bucks showed their championship toughness and rallied back from the fourth-quarter deficit. Despite 30 points from the Miami Heat’s Tyler Herro, the Bucks got the win 120-119.

The hometown kid led both teams with 30 points (6 3PM), 7 boards and 5 assists off the bench tonight pic.twitter.com/PyAmgtY6NB

The Miami Heat lit the court up from beyond the three-point line. The Heat shot over 45% from three-point range, knocking down 21 of their attempts.

With that said, the game remained close through three-quarters. The biggest lead for the Bucks was a 10-point lead toward the end of the first quarter.

Heat guard Gabe Vincent hit two of his five 3’s in the third as Miami turned the game around and moved ahead by 11. Vincent scored 21 points in the game.

Setback for a Major Comeback

Vincent hit two more threes in the fourth quarter to put Miami up by 14 with seven minutes to go. Miami led 113-99.

The Bucks had a lot of work to do.

Milwaukee mounted a major comeback after a Giannis Antetokounmpo dunk at just under the six-minute mark. Antetokounmpo scored 14 of his team-high 28 points in the fourth quarter. The Bucks kept the Heat off the board for about four minutes to pull within six points.

A series of stops and a Khris Middleton three-pointer cut the Bucks’ deficit to just one point.

With just 13 seconds left on the clock, the Bucks needed a big defensive play.

Antetokounmpo forced a jump ball with Miami’s Jimmy Butler, who is listed as 6-foot-7. Antetokounmpo is 6-foot-11.

The Bucks won the tip.

Bobby Portis grabbed the ball off the tip and passed it to Jrue Holiday. The Bucks pushed the ball up the court. As the clock ran down, Holiday drove into the lane. Vincent attempted to take a charge and ended up on the ground, allowing Holiday to put in the layup with two seconds on the clock.

With seconds on the clock and no timeouts, Miami launched a shot from beyond half court that missed and the Bucks completed the fourth-quarter comeback.

It’s the 200th win for Mike Budenholzer as the Bucks’ head coach. The Bucks are now 38-25 on the season and sit in fourth place in the Eastern Conference. Miami remains on top of the conference at 41-22.

The Heat will travel to Brooklyn to face the Nets tonight while the Bucks take on the Chicago Bulls Friday at 7:30 p.m.

Chris Will is a second-year journalism student with a focus in sports and media. Originally from the Fort Lauderdale area, Will is now the beat reporter for Florida Gymnastics and covers all things sports in Gainesville.
@_Chris_Will_
Previous Santa Fe College Baseball Cracks 16 hits in 19-7 Win
Next Auburn Pulls Away Late Against Mississippi State