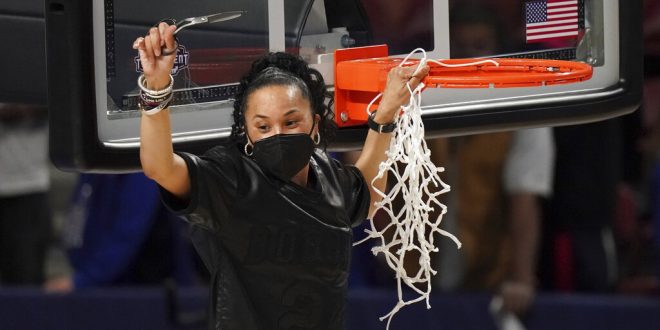 March Madness is officially here.  For the first time, the women’s tournament has expanded to 68 teams. Now, the SEC is heavily represented amongst the 68 teams in the field.

The Gators will make  NCAA Tournament appearance No. 16, the first since 2016. Selected as a No. 10 seed, Florida will face UCF in the Bridgeport Region on Saturday. Significantly, Florida’s postseason berth comes after a season full of ups and downs. In the regular season, the Gators finished with a 21-10 record.  Of the 21 wins, five were over top 25 ranked teams, including a win over No. 7 Tennessee.

The Gators’ success in the regular season secured them the fifth seed in the SEC Tournament. On March 3, the team beat Vanderbilt 53-52 in a late rally. In the win, leading scorer Kiki Smith went down late in the fourth quarter with a knee injury.

The Gators then fell to Ole Miss 70-60 in the quarterfinals round on March 4.

Prior to the SEC Tournament, Kelly Rae Finley was named as the eleventh women’s basketball coach at Florida. As the interim head coach, Finley led the Gators to their best season since 2015-16. Emphatically, she has been named a semifinalist for the Naismith Women’s Coach of the Year Award.

Florida and UCF last met in 2015 when the Gators dominated in the 93-79 victory. The Gators are 25-0 in their series against UCF, but the two teams have never met in the postseason.

Significantly, the winner on Saturday will advance to the second round and face the winner in the matchup between UConn and Mercer.

Moreover, the SEC is well represented in the tournament, with eight teams.

South Carolina sits at the top as the No. 1 overall seed. Overall, the Gamecocks hold a 29-2 record after falling 64-62 to Kentucky in the SEC Championship. Now, South Carolina’s first opponent will be revealed after the First Four play-in game between Howard and Incarnate Word Wednesday. With a win in the first round, they’ll advance to play the winner of No. 8 Miami vs. No. 9 South Florida.

Next, LSU is the No. 3 seed in the Spokane Region of the tournaments. The program returns to the NCAA Tournament for the first time since 2018. The Tigers will host No. 14 seed Jackson State at Maravich Center on Saturday. The winner will then advance and face the winner between No. 11 seeds Florida State and Missouri State.

The Vols earned homecourt advantage in the Wichita Region as the No.4 seed. Tennessee will open the tournament with No.13 Buffalo as the first opponent. The victor in the matchup will encounter the winner between No.5 Oregon and No.12 Belmont in the second round.

The Wildcats earned the No.6 seed in the tournament in an automatic berth after clinching the SEC title. They’ll face No.11 seed Princeton in Bloomington, Indiana. With a win, they will face either No.3 Indiana or No.14 Charlotte.

Georgia finished the season with a 20-9 record. The Bulldogs will enter the tournament as the No.6 seed in the Greensboro Region. The team will face either Dayton or DePaul. With a win, Georgia will face No. 3 seed Iowa State or No. 14 seed UT Arlington.

For the first time in 15 seasons, Ole Miss will appear in the NCAA Tournament. As the No.7 seed in the Wichita Region, the Rebels will meet with No.10 seed South Dakota in the first round.

The No.10 seed in the Spokane Region, the Razorbacks are making their second straight appearance in the tournament. Seven current starters for Arkansas were on last season’s tournament team. The Hogs will meet up with No. 7 seed Utah. The winner will advance to the second round and face the winner between No.2 Texas and No.15 Fairfield.

All games will be broadcast on ESPN networks.