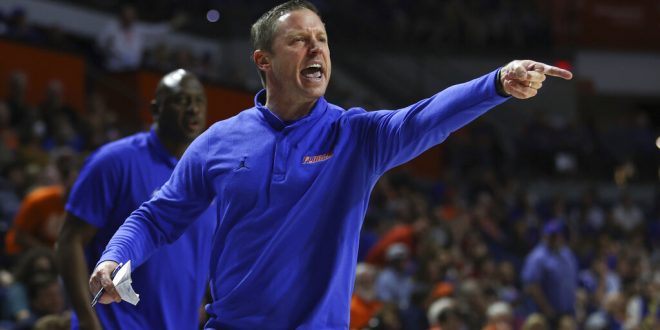 Florida head coach Mike White shouts to the team during the second half of an NCAA college basketball game against Arkansas on Tuesday, Feb. 22, 2022, in Gainesville, Fla. (AP Photo/Matt Stamey)

Georgia has hired Florida’s Mike White as its next men’s basketball coach. White is leaving the Orange and Blue after his seventh season with a 142-88 record and four NCAA tournament appearances. White averaged more than 22 wins during his 11 seasons and was named the 2017 SEC Coach of the Year. However, Georgia has struggled mightily as of late. According to Bulldogs radio analyst Chuck Dowdle, the aforementioned coach could be a breath of fresh air.

In the 1996 season, Tubby Smith led the Bulldogs to a 21-10 (9-7) record. Georgia defeated Clemson and the West Regional’s top seed, Purdue, before losing in overtime against Syracuse in the Sweet 16. Georgia has not won a tourney game since 1996.

Coach Tom Crean was fired Thursday after the Bulldogs were a first round exit in the SEC Men’s Basketball Tournament. Georgia fell to the Vanderbilt Commodores 86-51 Wednesday in Tampa.

Crean was previously the head coach of Indiana University. Prior to that, he served as head coach at Marquette University where his team reached the 2003 NCAA Final Four.

Chuck Dowdle, a well-known figure in Georgia media, was shocked to hear Florida fans demand for his exit.

Dowdle also expresses his hopes for the future of Georgia’s men’s basketball as the program is currently 13 in spending out of the 14 SEC basketball programs.

UGA athletic director Josh Brooks is confident that Mike White can elevate the program to compete in the NCAA tournament. Brooks has said that White is the coach that can build Georgia Basketball to a consistent winner on the collegiate basketball landscape.

Prior to White’s head coaching career, he was an assistant coach at Ole Miss for seven years and four years for the Rebels. White was a part of Ole Miss teams that made three NCAA tournament appearances and won a NCAA tournament game.