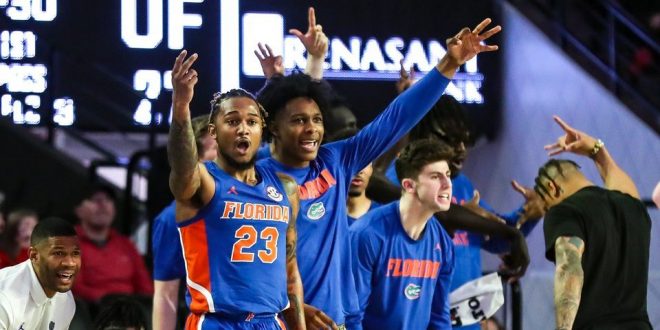 Florida will host Iona in NIT

Its tournament time, but not all teams make it to the big dance. Specifically, the Gators will be playing in the NIT Wednesday v. Iona, serving as the No. 3 seed in the tournament. Florida will be be coached by interim coach Al Pinkins as former coach Mike White left the team to go coach at rival Georgia Sunday.

Florida’s 2021-22 season was considered average by the grunt of the fan base, finishing the regular season at 9-9 in the SEC and 19-13 overall.  Surely, such performance led to the Gators  missing the Big Dance.

Florida was considered on the bubble to make the NCAA tournament. However, after losing to Texas A&M on Thursday in the SEC tournament, the team was all but eliminated.

Iona is coached by a familiar face for college hoops fans. Significantly, the Gaels are coached by Hall of Famer Rick Pitino, leading his team to 25 regular season wins. Yet, after falling to Rider in the MAAC Tournament, Pitino and co. are headed to the NIT. In 2021, Iona made an NCAA Tournament appearance.

Fans have begun to put the former Louisville coach atop of hot boards for Florida’s head coaching vacancy. Yet, at age 70 with loads of baggage, it remains unseen whether the former coach of Billy Donavan will garner serious consideration from the University.

William is a Senior at UF studying Journalism, specializing in sports media. William Plays on the UF club Table Tennis team and plays golf in his free time. He also enjoys cheering on the Orange and Blue in every sport. Born Miami, William Grew up with all the major sports teams. His favorite teams are the Boston Rex Sox and the Florida Panthers. He enjoys spending most of his time with his family and working on his table tennis podcast titled Slamming Into The Table
@https://twitter.com/WJHH_07
Previous Eight SEC teams in women’s tourney
Next Media Reacts to Mike White Leaving for Georgia