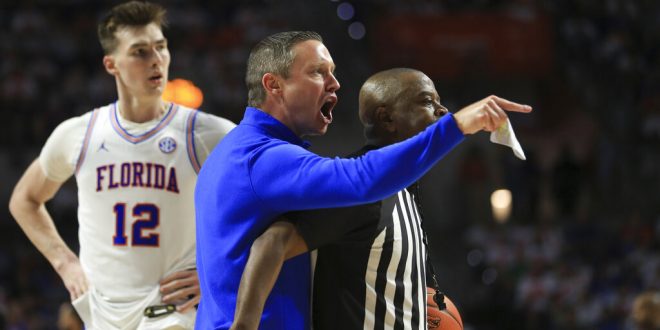 Florida head coach Mike White argues a call while being held back by a referee against Kentucky during the second half of an NCAA college basketball game Saturday, March 5, 2022, in Gainesville, Fla. (AP Photo/Matt Stamey)

There is a growing belief that White grew tired of the pressure of the Florida fanbase to take an opportunity where there is less expectations.

The interesting aspect of this move is the positive reaction it garnered from Florida fans. Significantly, Mike White had the near impossible task of following up Billy Donavan’s tenure. Surely, White’s four tournament appearances in seven seasons with several early exits left a sour taste for some Gator fans.

Florida has never been happier to lose to Georgia. https://t.co/j5tU1oetPe

The reaction from Georgia was generally positive. Notably, Georgia basketball has been a struggling program for years despite the notable hiring of Tom Crean in 2018. Emphatically, the Bulldogs finished this season with the worst record in the SEC (6-26) and have missed the tournament every year since 2015. Now, the hiring of Mike White is seen as an improvement to many Dawgs fans.

Then went out & hired a guy who has this resume & has seven years as a head coach in this league. A real good hire. #GoDawgs pic.twitter.com/tGCyZTOGsS