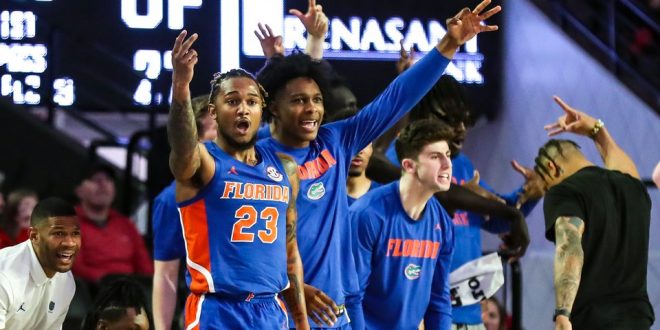 The Gators bench cheers after a big play during the 2021-2022 season. Florida will take on Xavier in round two of the NIT. Courtesy of Twitter: @GatorsMBK

Florida and Xavier Set to Clash in NIT Round Two

After a close 79-74 win over the Iona Gaels on Wednesday night, Florida will move on to round two of the National Invitational Tournament (NIT).

No Head Coach? No Problem.

The Gators did not enter the NIT on a strong note. In fact, they came in on a situation most programs would consider a death penalty in a tournament. Head Coach Mike White, who had lead Florida since 2015, announced that he would leave the Gators for the inter-conference rival Georgia Bulldogs. This caused a massive response in the fanbase, but did not slow down the team at all. Al Pinkins stepped up as the interim head coach for the tournament, and started his tenure 1-0.

Like most of the season, Florida relied on three big names. Senior Forward Colin Castleton not only put up an impressive 18 points, but managed 13 rebounds, making him an integral part of the win on Wednesday. Phlandrous Fleming Jr. and Tyree Appleby put up numbers as well, with 18 and 14 points in the game respectively. These three should be the key in taking down Xavier on Sunday, and will likely see extended amounts of play time.

A win in the first round doesn’t bring home a trophy, however. The Gators have to be able to respond in the second round as they face the Xavier Musketeers, the two seed. Florida has work to do if they plan on advancing once again, but Pinkins is ready to do whatever it takes. He was able to adapt to not only the opposition, but his own team as well. This adaption is what eventually pushed Florida ahead of Iona, and if the same method is applied on Sunday, the Gators may be able to launch themselves into round three.

The Musketeers Could be a Problem in the NIT

Despite not making the NCAA tournament, Xavier is not a team to take lightly. The team is 19-13 and on a five game winning streak, with a notable win over No. 19 Ohio State. The team beat Cleveland State 72-68 to start off the NIT, and are pushing for another win on Sunday.

The team is lead by Jack Nunge, Colby Jones, and Paul Scruggs. Nunge leads the team with 13.4 ppg and 1.4 blocks per game, while Jones hauls in 7.5 rebounds per game. Scruggs leads the team in assists and steals, making him essential to keeping a solid point gap. The team also keeps a solid 70.1% free throw percentage, which means the Gators have to stay away from fouling this team. Xavier also averages 37.3 rebounds a game, which needs to be minimized as much as possible if Florida wants to exit the court with a win. Colin Castleton should be able to minimize the threat, but he cannot play the whole game, meaning the rest of the Gators have to be on their A-game after shots.

If the Gators can shut down Xavier’s big three, and adapt to the game around them, Pinkins should be able to add another win under his belt. The Gators do not give up a fight easily, and they should be ready to fight for it all on Sunday afternoon.

Previous Tennessee Scorches Longwood in Round one.
Next Patrick Toney Holds High Hopes for Gators Defense