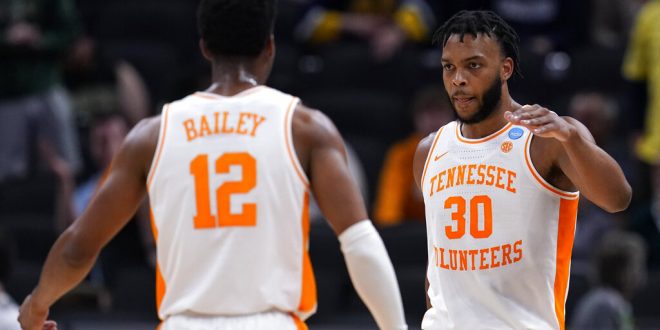 Tennessee guard Josiah-Jordan James (30) celebrates with teammate Victor Bailey Jr. (12) during the first half of a college basketball game against Longwood in the first round of the NCAA tournament in Indianapolis, Thursday, March 17, 2022. (AP Photo/Michael Conroy)

Tennessee Scorches Longwood in Round one.

The No.3 seeded Tennessee Volunteers route No.14 Longwood in the NCAA Tournament Thursday.

The Volunteers finished the regular season with flying colors, and capped it off with an SEC victory over Texas A&M. They were winners of seven straight heading into the tournament and got the three seed.

They faced off against the Longwood Lancers.

Tennessee got off to a scorching hot start. Led by Santiago Vescovi, he lit it up from the three, going 6-8 and led the team with 18 points. Josiah-Jordan James followed up with 17 points and nine rebounds.

Tennessee never gave Longwood a chance in this game. The Volunteers scored a whopping 56 points in the first half. It was just pure dominance.

John Fulkerson got things rolling for the Volunteers, he dominated the paint where he scored 12 of his 15 points in the first half.

As a team, they shot 60% from the field and 58% from three. Long wood just had no answer for the Volunteer offense.

Longwood was a first time tournament team and came in with some momentum. They were winners of eight straight including champions of the Big South Conference Tournament.

They started off strong, but a turnover in the middle of the first half let Tennessee put their foot on the gas, and they didn’t let up.

Justin Hill led the way for the way with 13 points for the Lancer’s.

Longwood couldn’t find the bottom of the bucket as they only shot 38% from the field and 32% from the three.

Tennessee’s offense just overwhelmed them and they couldn’t keep up.

The Volunteers will face off against the Michigan Wolverines.

Michigan upset Colorado State Thursday and will be coming into the game with a lot of momentum. Tennessee and Michigan battle for a spot in the Sweet-16 Saturday and tip-off is set for 5:15.