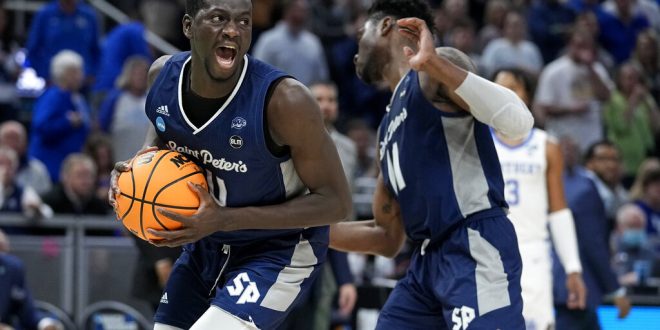 Saint Peter's forward Hassan Drame celebrates after grabbing a rebound during overtime in a college basketball game against Kentucky in the first round of the NCAA tournament, Thursday, March 17, 2022, in Indianapolis. Saint Peter's won 85-79. (AP Photo/Darron Cummings)

As March is midway through, March Madness is just beginning its pandemonium. Everybody watches the NCAA Men’s Basketball Tournament with the highest hopes of seeing crazy upset victories. March Madness has seen giants fall, 1-seeds fall to 16-seeds in the Round of 64; but most recently, the 15-seed St. Peter’s Peacocks upset the 2-seed Kentucky Wildcats in the 2022 Round of 64.

To put the upset’s magnitude into perspective, more people picked Kentucky to win the national championship in their brackets (6.01 percent) than people picked St. Peter’s to even win in the first round (3.04 percent).

Peacocks in the Record Books

Going into one of the opening games of the entire NCAA Men’s Tournament, the Kentucky Wildcats were 18.5 point favorites. When looking at a bracket, sports betters would call this game a “lock” for Kentucky. But without upsets there would be no madness in March. With an 85-79 overtime victory, the St. Peter’s Peacocks locked in their first ever NCAA Tournament win. As the St. Peter’s Peacocks advance to the Round of 32, they now sit in the history books as the tenth 15-seed to upset a 2-seed in the first round of the NCAA Men’s Basketball Tournament.

The St. Peter’s Peacocks head coach, Shaheen Holloway had much to say about this upset. He alluded to the fact that every team is equal once on the floor. At the end of the day, it’s called March Madness for a reason.

“It’s not about your record, it’s not about what school you’re at, it’s about whoever is good on that night… and tonight was our night,” Coach Holloway said.

This game was close from the start. From slightly sloppy offensive play to great defense, the first points didn’t come until a few minutes into the first half. After the first points were scored, the rest of the game opened up. By half, the Peacocks and Wildcats were tied at 37-37. And by the end of regulation the two teams were still tied, forcing overtime. As the Peacocks came prepared to shock the world, St. Peter’s ultimately took down one of college basketball’s blue bloods 85-79.

Much like the game’s scoring, the rest of the game’s statistical categories were just as tightly-knit. With this, the Peacocks shot 50.9 percent from the field with Kentucky shooting 42.6 percent. But Kentucky was one up on the rebounding, out-boarding St. Peter’s 36-35. But as many know, March Madness games oftentimes come down to free throws. This is where the Peacocks took over as St. Peter’s had exactly a 20 percent advantage at the line, shooting free throws at 85.7 percent.

For Kentucky, they will have to wait until next season to right there wrongs from this massive upset. But for St. Peter’s, the program now has its first tournament win under its belt. The St. Peter’s Peacocks will now face the Murray State Racers in the second round. With everything at this point being new to the Peacocks, St. Peter’s look to secure the team’s first Sweet Sixteen appearance in program history.