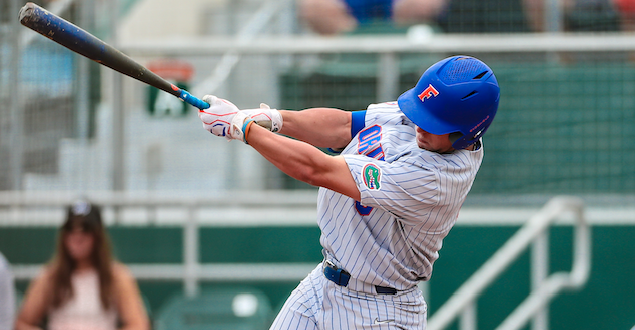 Colby Halter swings at a pitch in the Gators 6-4 win over the Alabama Crimson Tide. Photo courtesy of @GatorsBB Twitter.

The ninth-ranked Gators baseball team (14-4, 1-0 SEC) opened SEC play last night, taking on the Alabama Crimson Tide (12-7, 0-1 SEC). Hunter Barco shined once again for the Gators, pitching eight innings, giving up just one earned run and striking out 10 batters. Early runs in the second and third inning proved to be pivotal for the team, as the bullpen struggled in the ninth inning. Ultimately, the Gators would hang on to defeat the Crimson Tide 6-4, earning their first SEC win of the season.

Singles from Kendrick Calilao and Josh Rivera opened the top of the second inning for the Gators and a Kris Armstrong sacrifice bunt allowed the two to advance to second and third with just one out. Deric Fabian then came up to the plate and roped a single to center field, scoring Calilao and Rivera to put the Gators up 2-0.

Later in the inning, Jud Fabian stepped up to the plate and reached his bat out to an outside fastball. The ball made its way over the right-field fence, scoring his brother and extending the Gators lead to 4-0.

In the top of the third, BT Riopelle led off the inning and stayed back on a changeup, crushing it over the right-field fence and giving the Gators a 5-0 lead.

Hunter Barcos did everything he could to keep the Crimson Tide hitters off-balance throughout the game. Pitching a career-high eight innings, Barco efficiently set down Alabama hitters striking out 10. Though, a mistake came in the bottom of the eighth inning, giving up a solo home run to Alabama’s Andrew Pinckney. Barco would get through the inning, but the bullpen took over in the bottom of the ninth.

However, the Gators bullpen struggled. Nick Ficarrota began the inning, but surrendered multiple hits and hit a batter. The Tide quickly capitalized and the Gators lead was cut to just two runs with the bases loaded and one out.

Blake Purnell relieved Ficarrota with the bases loaded, hoping to get a ground ball for a double play. He did just that, getting Alabama to ground into a 6-4-3 double play to end the game and get the Gators a 6-4 win.

The Gators are set to play the Crimson Tide in game two of the series tonight at 7 p.m.