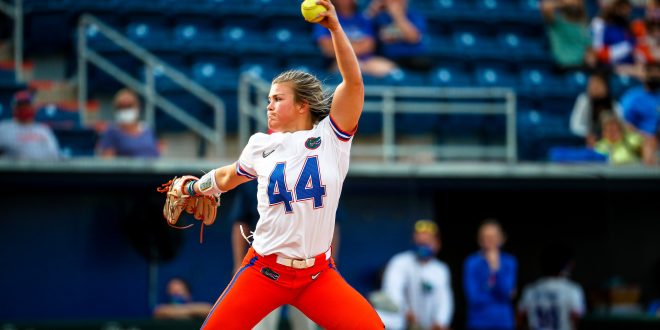 Gators Softball Shutout by the Aggies

Florida will be looking to take the series Sunday to close out the weekend. The game is slated to begin at 1 p.m.

Gators Ice Cold at the Plate

Texas A&M pitcher Makinzy Herzog made life difficult for the Gators. Florida struggled to get on base by any means in this game. Furthermore, they struggled to even get close to hitting the ball. Strikeouts were a major problem for them while batting. 15 of their 21 outs came via the strikeout. Additionally, they did not earn many free passes. In this game, the Gators only had one batter walked compared to the five for the Aggies. By the end, Florida ended with only three hits.

Although Florida had nearly the same amount of hits as Texas A&M, they could not put any runs across the board. In the first inning, they had Kendra Falby on second base with no outs, but could not get her to cross home plate. In the fifth inning, they had runners on first and second with one out, but, again, they did not manage to get a run. They would fail to score any runs against the Aggies, which makes it hard to win the game. Overall, the Gators had a rough day in the batter’s box against Herzog.

Aggies Work the Gator Pitchers Early Leading to the Win

Florida threw three pitchers on Saturday against Texas A&M. Natalie Lugo started for the Gators in this game. Her appearance would be short-lived as she only pitched two total innings. In her two innings, she struck out two, but gave up four earned runs, two hits and walked four batters. Her four runs given up all came on one pitch. In the first inning with two outs, Lugo gave up a grand slam that provided the Aggies the early 4-0 lead over Florida.

Lexie Delbrey came in to replace Lugo in the third inning. Her outing would go better than Lugo’s as she would not allow a run in her two innings. Delbrey struck out two and only gave up one hit during her time in the circle.

Following Delbrey would be Rylee Trlicek. Trlicek would close the game for Florida. She gave up one earned run in her two innings of work. However, she did not have the chance to come back to the mound in the seventh as the Gators would not score any runs in the top of the inning, which ended the game.