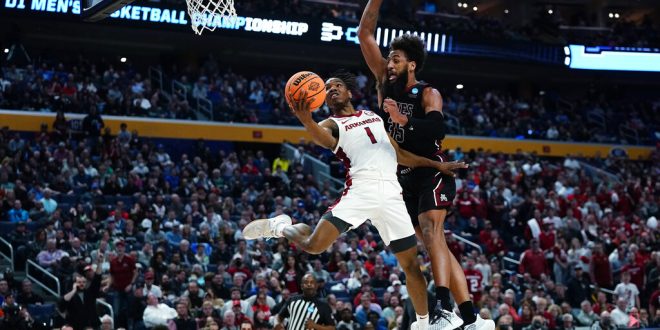 Arkansas guard JD Notae (1) shoots against New Mexico State forward Johnny McCants during the first half of a college basketball game in the second round of the NCAA men's tournament Saturday, March 19, 2022, in Buffalo, N.Y. (AP Photo/Frank Franklin II)

After the opening weekend of men’s March Madness, Arkansas is the only SEC team left standing.

Notably, the Razorbacks have returned to the Sweet Sixteen. According to ESPN, 91.6% of people who voted believed Arkansas would have been eliminated by now. Not only were they able to return to the Sweet Sixteen, but they are also now the only SEC team remaining.

In the Round of 64, the Hogs survived a potential upset. No. 4 Arkansas took on No.13 Vermont on Thursday. After an intense battle, the Hogs came out on top; 75-71. A stellar performance from Stanley Umude paved the way to victory for the Hogs. Umude dropped 21 points, nine rebounds and two blocks. Given that it was his first NCAA tournament game, it makes his performance that much better. It was a close game from the tip until the final buzzer. The largest lead was only 10 points and was a four-point game with nine seconds left. There were some controversial calls in the final seconds; however, the Hogs pulled through and were able to advance to the next round.

After taking down Vermont, the Hogs moved on to the No. 12 ranked New Mexico State Aggies. The Hogs came out on top with a final score of 53-48. Notably, a much lower-scoring game. Both teams put up a fight on defense. Arkansas was able to force 9 turnovers against NM State. Star player JD Notae was responsible for 3 steals. It seems both teams had a hard time finding their rhythm on offense. The Hogs were up eight, 41-33, with six minutes left in the game after going on a 6-0 run. It wasn’t pretty, but a win is a win.

The Hogs will now take on No. 1 Gonzaga and look to continue their win-streak Thursday in a highly anticipated matchup. Gonzaga is a strong favorite to win, but if the Hogs keep their momentum, anything is possible. There has already been some wild upsets so far; will we see another?

ESPN gives Arkansas a 14% chance on their matchup predictor.

I’m sorry that number should be closer to 40%. Absolutely nothing indicates to me Gonzaga should be that favored against a top 25 team. #MarchMadness #WPS pic.twitter.com/SnkIZrxxJQ