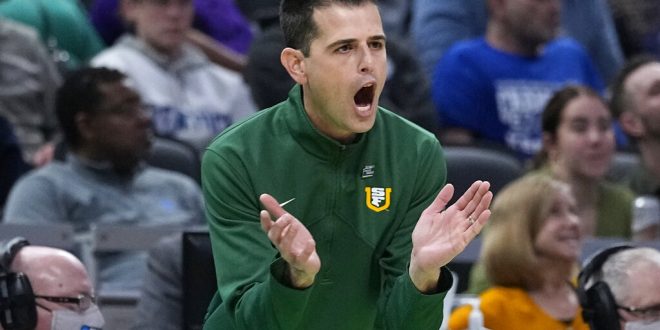 Stricklin and the Golden Era

On Wednesday, Todd Golden was officially introduced as the new Florida men’s basketball head coach. The 36-year-old is the Gators’ 19th men’s basketball coach in school history. In the press conference, Florida’s athletic director Scott Stricklin also discussed Golden’s hiring and what he believes Golden will bring to Florida.

Golden was always a person of interest in Florida’s search for a new men’s basketball head coach, Stricklin said. Also, when looking at metrics and rankings, he said Golden’s teams kept coming up.

Stricklin said he values four things in a head coach, which Golden checked all of the boxes for:

In the press conference, Stricklin also had a message for Gator Nation.

“Todd wanted to be a Florida Gator,” he said.

On a final note, Stricklin also said Golden is already where the sport of college basketball is heading.

Why Golden is an important hire for Stricklin

The hiring of Golden means more than just rejuvenating the Florida men’s basketball program. Stricklin needs a hiring success story. Following the debacle behind the firing of former Florida football head coach Dan Mullen, Stricklin has something to prove in his ability to recruit winning coaches.

He hired Mullen back in 2017 where he confidently stated, “I strongly believe Dan is the most prepared candidate to have immediate and long-term success at the University of Florida.”

For Stricklin, it’s also imperative Golden lives up to the high expectations he has set already for Gator Nation.

Kaitlyn Wadulack is a third-year journalism student specializing in sports and media at the University of Florida. You can reach Kaitlyn at k.wadulack@ufl.edu
Previous Pat Dooley’s High Five (March 24th)
Next No. 1 Gonzaga – No. 4 Arkansas Hoops Preview