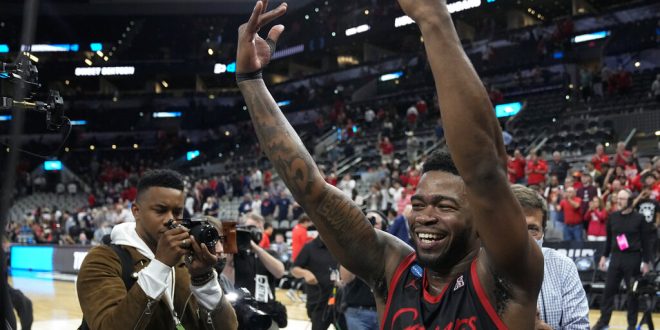 Houston guard Jamal Shead celebrates after their win against Arizona in a college basketball game in the Sweet 16 round of the NCAA tournament on Thursday, March 24, 2022, in San Antonio. (AP Photo/David J. Phillip)

Houston holds off Arizona 72-60 to advance to the Elite Eight.

Houston’s defense came up big in the matchup against Arizona. It has been the lifeline of the Cougars game this season.

Houston ranks third among all division one schools in defensive efficiency, and it surely showed on Thursday.

Head Coach Kelvin Sampson says that not guarding Arizona like other teams was a big part of their game plan.

Additionally, Houston kept Arizona’s top scorer under 20 points and the team under 35% shooting.

The Cougars put their foot on the gas, and never let off.

Houston took a 2-0 lead at the beginning of the game and never let up. They had the lead for the entirety of the game.

Jamal Shead, led the way with 21 points, he led all scorers. The sophomore also added four rebounds and six assists to the effort.

Houston advances to the Elite Eight for the second straight year.

Arizona was the third one-seed in the tournament to take a loss this year.

The Wildcats struggled in almost all aspects as they shot 32% from three-point land, 33% from the field, and out-rebounded.

They could not find a groove long enough to come back all the way in this game.

The top scorer for them was Dalen Terry with 17 points.

Head coach Tommy Lloyd said it was hard for his team to get comfortable.

A Look Ahead For Houston

With Houston’s win, they are now in the Elite Eight and will face off against the two-seed Villanova.

The Villanova Wildcats just game off a big win against Michigan.

Villanova and Houston will face off for the seventh time in each other’s history. The winner of this game will obtain bragging rights as the series is tied at 3-3.