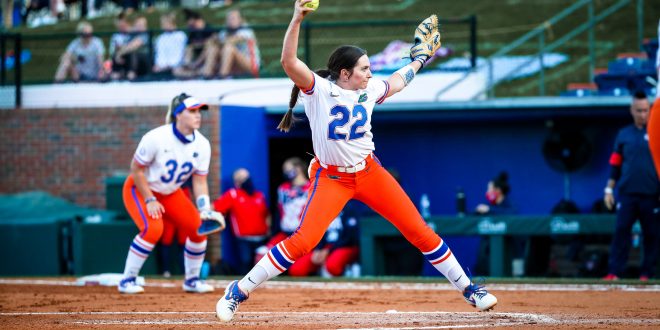 The Florida Gators (26-4, 4-3) were shut out 6-0 at home by the Tennessee Volunteers (21-8, 4-2) Friday night following a rough performance on both sides of the ball.  They will go at it again tomorrow at 1 pm to try and even the series up.

Looking to bounce back and even the series tomorrow at 1 p.m. ET on SEC Network + #GoGators pic.twitter.com/I5m40PlDhm

Volunteers Get the Better of the Gator Pitchers

Elizabeth Hightower got the nod to start on Friday against Tennessee. She started off strong by going the first four innings without allowing a run. She had been close to giving up runs in some of the innings but she never caved. However, in the fifth inning, she finally gave way. With one out, Tennessee launched a home run off Hightower to gain the 1-0 lead. This run opened up the flood gates for Tennessee.

In the next inning, she would get tagged with two more runs. Having two outs on the board and two runners on base she gave up a double to push Tennessee’s lead to 3-0. Although Hightower made life difficult for the Volunteer batters in her time on the mound, it was not enough for the Gators. Hightower went five and 2/3 innings with six strikeouts, three walks, seven hits and three runs.

Her night ended in the sixth inning when Marissa Mesiemore came in from the bullpen. Mesiemore came in to get the final out of the sixth inning and part of the seventh. It was a difficult seventh for Mesiemore. She gave up three runs, four hits and walked one before being taken out of the game and leaving the Gators with a 6-0 deficit. Haley Pittman finished off the seventh for Florida getting the final out of the inning via a ground out to first base.

Tennessee did not get any runs in the first four innings of this game but made their scoring run in the final three innings. And the pitching unit as a whole gave up 11 hits and five walks resulting in six runs for the Volunteers. Additionally, they only struck out six total batters, all coming from Hightower.

Gators Batting Have Rough Night at the Plate

Florida’s offense struggled for most of this matchup. Getting a couple of hits, but never amounting to any runs. The Gators did get close to putting a run on the board in the fifth inning. They had runners on second and third base with one out but failed to score either. They just could not put a string of hits together to score against the Volunteers.

The Gators had another shot at scoring in the bottom of the sixth inning when Skylar Wallace got on base. She eventually made her way to third base after a stealing second and a throwing error from the Volunteers. However, with two outs, they could not manage to score her. Wallace was one of the only positive performers from the Gators on offense tonight, she finished two-for-three in this game.

Against Tennessee, Florida batters did not earn a single walk nor did they get hit by a pitch. While on the opposite end, Tennessee batters were walked five times. They were also outhit by five. Additionally, Florida struck out five times against Tennessee. Florida did not score any runs in this game, which would only be the third time this season.