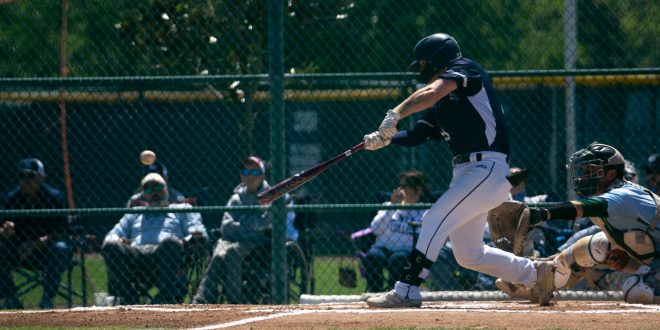 The Santa Fe Saints tallied a season-high 20 hits in today’s game, winning 11-1 in only six innings. This is Santa Fe’s third game in a row scoring nine or more runs.

On a beautiful Saturday afternoon, the Saints started off on fire with RBI singles by both Jake McKee and Jacob Guthrie. This broke the game open early and led the Saints to a quick three-run lead to open the first inning.

The Saints continued their momentum into the second inning by tallying seven hits and a home run. Gabriel Esquivel’s three-run blast would break the game wide open and make the score 7-0 by the end of the inning.

Gabriel Esquivel blasts a 3-run shot to add to the Saints lead. pic.twitter.com/p1XzZsQjkr

The bats seemed to cool off for a few innings until Esquivel hit an RBI double, driving in two runs in the fifth inning. Later Esquivel would reach home via an RBI single by Xavier Moronta, making the score 10-1.

Wyatt Campbell would end the game in the bottom of the sixth by hitting an RBI double. The Saints would win by a mercy rule 11-1.

This afternoon, the Saints Ace Mitchell Gross took the mound and had a great outing. The Georgia Southern commit pitched the whole game allowing six hits and only one run.

The LHP has posted a 3.77 ERA throughout the season up till this point with 45 innings pitched.

Gabriel Esquivel and Jevin Relaford drove in three runs during this Saturday’s contest.

Every batter in the Saint’s starting lineup recorded a hit.

The 20 hits against Lake-Sumter is the most in a game this season for the Saints and only took six innings to obtain.

Mitchell Gross was the only pitcher Saturday and only allowed one run.

The Saints started the series exceptionally well Saturday and will look to continue their winning ways at home Monday, March 28, at 3:00 pm against Lake-Sumter State College.