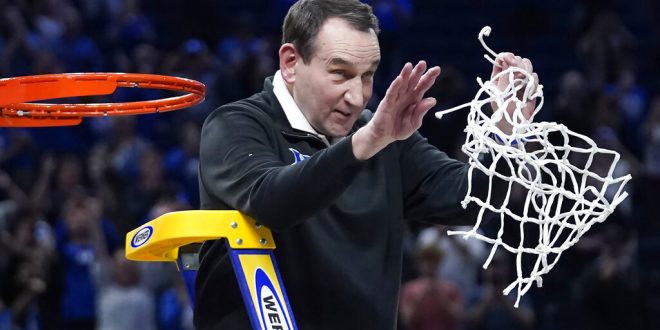 Duke head coach Mike Krzyzewski celebrates while cutting down the net after Duke defeated Arkansas in a college basketball game in the Elite 8 round of the NCAA men's tournament in San Francisco, Saturday, March 26, 2022. (AP Photo/Marcio Jose Sanchez)

Coach Mike Krzyzewski keeps his farewell season alive, advancing to the Final Four with a win over Arkansas on Saturday. This marks his 13th Final Four appearance in his 42 year tenure at Duke University.

The Blue Devils offense exploded putting up 79 points against one of the nation’s best defenses. Led by Paolo Banchero and AJ Griffin, Duke went on a 10-0 run in the second half and cruised to victory. Now, they are playing their best basketball at the right time.

This is the first Duke team to reach the Final Four since 2015, and that team ended up winning it all. Coach K was asked about where this team stacks up compared to some of his squads in the past. He praised them for being one of the few to make it this far.

A First And Last For Coach K

Duke will have a shot at not only a national championship appearance, but redemption. For the first time in NCAA Tournament history, blue-blood rivals Duke and North Carolina will face off in matchup No. 258. This comes in the wake of North Carolina’s massive upset over the Blue Devils in Coach K’s final home game back in February.

For Coach K and Duke, they are hungry for a rematch and relish a shot at ending UNC’s championship dreams. For the Tarheels, they have a chance to spoil Coach K’s final season once again and could have the ultimate bragging rights over their neighboring school. The stakes have never been higher in this rivalry. Coach K mentioned how special it is to get into the Final Four pregame before playing Arkansas.

While this is the last season for Coach K, it is the very first for UNC’s Hubert Jones. His miraculous run with the 8-seeded Tarheels is worthy of its own story. Coach Jones becomes the 10th head coach in NCAA Tournament history to take his team to a Final Four in his first season. After ending Saint Peter’s cinderella run, Coach Jones expressed his excitement for his team’s accomplishment.

These rivals have been close to facing each other in the tournament before. Most notably in 1991 when both teams were in the Final Four, but UNC fell to Kansas and failed to meet Duke in the National Championship Game. North Carolina holds the all time lead in the series, 142-115. However, Coach K holds a 50-47 all time record against UNC as Duke’s head coach.