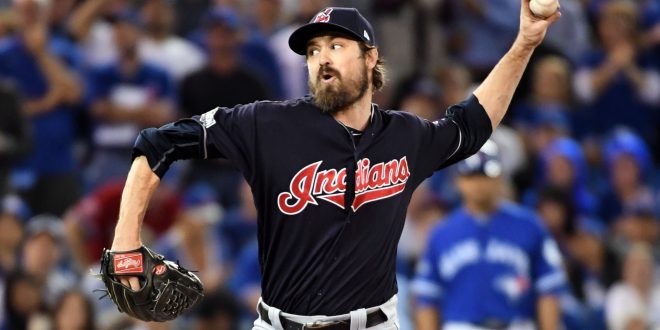 After 16 seasons in the Major League, veteran relief pitcher and Gainesville native Andrew Miller is retiring. Miller talked with Steve Russell of WRUF to reflect on his career and thank those supporting him along the way.

After 16 seasons in the majors, Andrew Miller has announced his retirement. pic.twitter.com/D9ZWs5AoYN

A look at Miller’s MLB career

Miller graduated from Buchholz High School where he pitched for the Bobcats. He was selected the Florida baseball Gatorade player of the year in his senior season as well as a selection for first-team all-state.

The Detroit Tigers selected the Gainesville native sixth overall in the 2006 MLB Draft and would make his professional debut with the Lakeland Tigers. The southpaw’s stint with Lakeland would last less than a week, as Detroit called him up to the major leagues that season.

In his first season with the Detroit Tigers, he posted a 0-1 record with a 6.10 ERA. After that, he would become part of the Tigers’ biggest trades in franchise history. Moreover, Miller was one of six players traded to the Miami Marlins in exchange for Miguel Cabrera and Dontrelle Willis.

When looking back on his career, Miller says he is proud to have been part of and work with so many successful organizations.

Miller’s work for the union further cemented his legacy in league history. He spoke on what it meant working with the players’ union and his experience during the negotiating process.

Why Andrew Miller is retiring

Tori Edwards is a fourth-year Telecommunications student specializing in News with an outside concentration in Sport Management. Tori works as an author and reporter for WRUF.com and is the voice of trendings on Monday afternoons on ESPN 98.1 FM - 850 AM WRUF. You can reach Tori at victoriaedwards@ufl.edu.
@ToriEdwardsNews
Previous Coach K stays alive
Next Miami Heat Ends Losing Streak