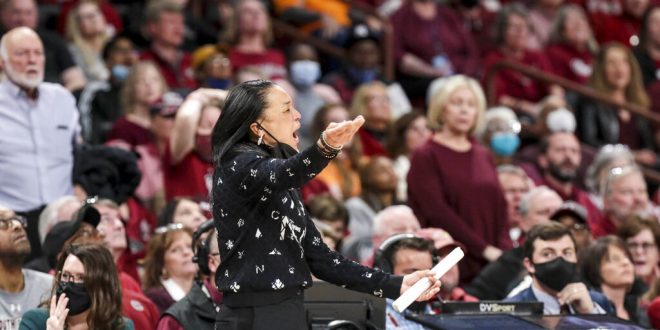 South Carolina is now one game away from the program’s second NCAA title in five years. Emphatically, the Gamecocks defeated No.10 Creighton 80-50 Sunday. Now, Dawn Staley has won the Greensboro Region in route Final Four. Surely, the team was led by leading scorer Aliyah Boston.

We will see you in Minneapolis, FAMS! pic.twitter.com/WPwz4CYzKE

Certainly, South Carolina didn’t let up on either side of the ball.

In the Sweet 16 Tournament against North Carolina, the ‘Cocks shot 33% from the field. In Sunday’s showdown, the Gamecocks improved to 50%, their best shooting performance in the Tournament. Evidently, South Carolina’s performance offensively was on display, outscoring Creighton 46-25 in the first half. Additionally, USC managed to capitalize on their size advantage as well, scoring 30 of their first-half 46 points in the paint. Significantly, Creighton was also outrebounded 43-23 in the game.

South Carolina’s efforts were led by Boston’s 19 points. Notably, she led the team in regular-season scoring and added three rebounds and assists Sunday. Though Boston had her double-double streak snapped, the junior has another chance at redemption after missing the final shot in the semifinal loss to Stanford last year.

Boston was named the Greensboro Regional’s Most Outstanding Player and placed on the regional’s all-tournament team alongside teammate Destanni Henderson.

On Creighton’s end, they were led by 12 points from sophomore Laura Jensen, who was also named to the Greensboro All-Regional Team. The team went on a remarkable run this season, appearing in their first Elite Eight Tournament in program history.

here’s what you’ve all been waiting for.
watch as many times as you want…we can’t stop. #GoJays x #MarchMadness pic.twitter.com/T7QF9WwmcL

South Carolina will advance to their fourth Final Four appearance. They await the winner between No. 1 Louisville and No. 3 Michigan. Also, the Wichita Regional final between Michigan and Louisville will take place on Monday at 9 p.m. ET.