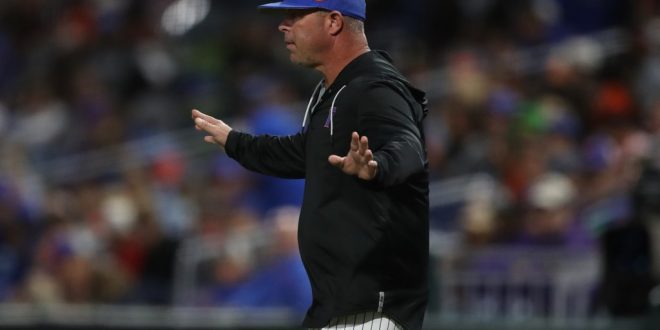 The Florida Gators face their toughest matchup of the year Tuesday as they travel to Jacksonville for a matchup with the Florida State Seminoles.

The Noles (16-7) enter the game ranked No. 5 in the country and are coming off a series win over Duke. Meanwhile, the Gators (17-7) fell to No. 14 following a series loss to the LSU Tigers.

Tuesday is the first of three games between the in-state rivals that will take place this year. The initially scheduled first matchup got postponed two weeks ago due to weather and will be made up May 17.

Florida will be looking to bounce back in a big way from the conference loss to LSU. A win over a top-five team would go a long way towards building confidence for this young team.

It was the pitching for Florida that was its downfall over the weekend. In their two losses to the Tigers, the Gators were outscored 27-6 and their starting pitchers lasted a combined 5.2 innings. Florida has struggled to find three solid options that can put it in a position to win every night out.

Head coach Kevin O’Sullivan spoke after Saturday’s loss about the situation in the rotation.

With a short week ahead–Florida’s series with Georgia starts Thursday–the weekend starters are off limits Tuesday. As a result, UF will turn to sixth-year senior Garrett Milchin to start against the Noles.

Milchin is on the tail end of a wild ride at Florida that includes two Tommy John surgeries in six years on campus. He has had strong year to this point, pitching to a 1.64 ERA in 11 innings across five appearances.

In his first career start in 2017, the Windermere, Florida native faced off against Florida State and delivered arguably the best start of his career. His 4.1 scoreless innings on the same mound he will pitch from Tuesday led the way to a 4-1 win over the Noles. Of course, the Gators would go on to win the National Championship that season.

It is a different story on the other side, as Florida State’s pitching staff is off to a great start as all four of their main starters have ERAs under 3.00. Tuesday’s starter, Carson Montgomery, boasts a 2.81 ERA and 22 strikeouts in 25.2 innings across five starts.

Pitching is definitively the strength of the Seminoles roster as the offensive numbers are not great. The Seminoles have just three regular starters hitting over .270, compared to seven for Florida. As a team, Florida State is hitting .284 with an .863 OPS. On the flip side, Florida is hitting .295 as a team and is putting together a very strong .909 team OPS.

Alex Toral is one to keep an eye on in the FSU lineup. Toral transferred to Tallahassee from arch-rival Miami and has put up big numbers. He is hitting .276 with an exactly 1.000 OPS, leading the team with seven home runs. As he did with the Hurricanes, Toral provides a major power threat in the heart of the Seminole lineup.

The most dangerous threat from Florida State is Jaime Ferrer. His numbers leap off the page, posting a .363 average and an extremely impressive 1.107 OPS.

The Gators are known as a team that can struggle with the strikeout, but their issues pale in comparison to Florida State’s. In fact, the Seminoles have five players that have more strikeouts than UF’s leader in the category.

If the Florida offense can break through against Montgomery, it puts itself in a good position to take a victory Tuesday. Still, it will need Milchin to deliver against an offense that is certainly capable of a big number.

Florida’s offense has been great this year but it needs to get back on track. It struggled against LSU, but a lot of those ABs came in garbage time during blowouts. The pitching put the team on the backfoot all weekend and it led to some wasted at bats. That has caused the overall stats for Florida to take a bit of a hit.

After Friday, Florida scored just six runs in the final two games of the weekend including just two runs in Sunday’s game.

One guy that needs to get back on track for UF is Jud Fabian, who had just one hit in the series against LSU. In the series, his batting average dropped from .316 to .287 for the season.

Fabian is the key cog in the offense and he will need to play a big part in this week’s games if Florida is to get back to its winning ways.

Luckily, left fielder Wyatt Langford is still on fire, hitting .360 with a 1.166 OPS on the season. His nine home runs on the year trail Fabian by just one for the team lead in that category.

Wyatt Langford got a cement mixer and did not miss it. Absolutely crushed this bomb to blow the game open. pic.twitter.com/cDLNOXFD58