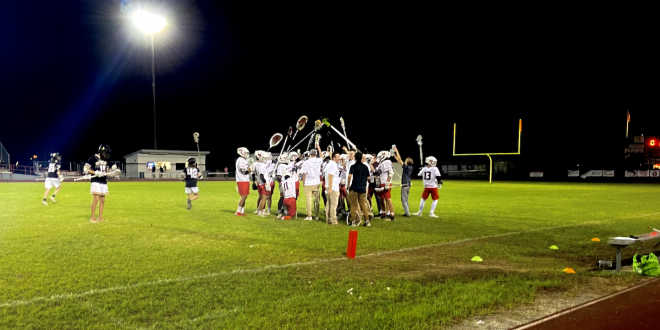 As soon as the game started, the Raiders wasted no time finding the back of the net. Santa Fe’s Anthony Rollins nailed a shot in the bottom left corner of the goal one minute into the game.

With 3:40 left in the first quarter, Rollins tallied another goal for the Raiders. Buchholz entered the second quarter with a 3-2 lead.

The Raiders could not find a way to stop the Bobcats from scoring in the second quarter. Less than a minute into the second quarter, Bala buried a shot in the bottom right corner of the goal. Immediately following Bala’s goal, Buchholz’s John Haugh won a face-off and scored to put the Bobcats up 5-2.

The scoring didn’t stop there, as Bala tallied a hat trick and Denver Trippsensee posted a goal of his own. The Bobcats closed the first half with four unanswered goals and a 7-2 lead.

At halftime, Santa Fe coach Joey Mandese told his team they needed to get back to the way they were playing at the beginning of the game. The team clearly got the message as they shut down the Bobcats for the first seven minutes of the second half. In addition to their stellar defense, the Raiders were also able to consistently maintain possession of the ball.

With 4:34 left in the third quarter, Buchholz’s Bala ended the scoring drought. Two Buchholz goals shortly followed from Aaron Lower and Ransom to give the Bobcats a 10-2 advantage heading into the final quarter.

Rollins kept the Raiders’ hopes alive with a quick goal to open the fourth quarter. Although down seven scores, the Raiders kept fighting until the end. Rollins posted another goal, followed by a score from Caleb Hart.

However, the Raiders’ three goals in the fourth quarter wouldn’t be enough to close the scoring gap. The Bobcats walked away with a 12-5 victory.

Coach Mandese after the match discussed what the focus was for his team going into the match.