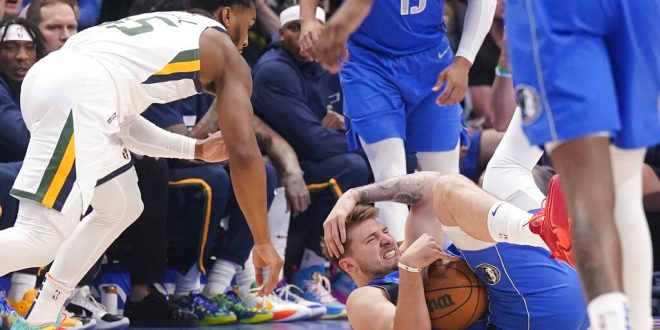 The 2021-2022 NBA season ends on April 10 – meaning, just under two weeks remain. The 25 teams still alive for a playoff or play-in spot are running out of time to secure their place in the postseason. These last 11 days are going to be as disarranged with moving parts as any end to a season has been in recent memory.

It can get difficult to follow.  Who can finish as what seed? What will the playoff matchups look like? The seeding in both the Eastern and Western Conferences is almost entirely still up for grabs.

In the West, all but the Oklahoma City Thunder and Houston Rockets have a heartbeat. The Phoenix Suns lead the pack, while the Portland Trailblazers hang on by a strand. Between the Valley of the Sun and the City of Roses, though, question marks and potential outcomes are aplenty.

Speculative answers exist now, to some extent. Specifics, however, remain to be seen until all the remaining wins and losses find their way into the columns.

For now, the following is what we’ve got.

The current Western Conference standings see Phoenix sitting comfortably at the one-spot, the Grizzlies not too far behind and then a mess of the Mavericks, Warriors, Nuggets and Jazz in the 3-6 spots. In the 7-10 play-in seeds stand the Timberwolves, Clippers, Pelicans and Lakers. The Spurs, Kings and Trailblazers – while currently out of the picture – have yet to be stripped of all hope, still vying for one of those seven-10 spots.

The Play-In picture as of today!

Teams ranked 7-10 will compete to secure the final two spots for each conference in the #NBAPlayoffs presented by Google Pixel.

The Suns have flatly been untouched this season.

Coming off of a 51-21 season accompanied by their first finals appearance in nearly 30 years, Phoenix took yet another step forward in the second year of Chris Paul’s tenure with the team. They sit at 62-14 with just four games left to play.

They’ve already clinched both their division and the top seed, and they’ll go into the postseason as the odds-on favorites to represent the West in the NBA Finals for the second-straight year.

No team is looking forward to playing these guys in late April or June.

Not far behind, though, lie the biggest surprise of the season: the Memphis Grizzlies.

The Grizzlies, led by star-guard Ja Morant playing in his third season, are 54-23 with five games remaining.

Preseason projections had the Grizz as playoff hopefuls. Five months later, they’ve secured their place right below the powerhouse Suns and are thought by many to be a sneaky pick to win the West.

They’ve secured their position as the two-seed. Now, they await a healthy Ja Morant for their quest to be one of the youngest teams to ever make or win an NBA Finals.

Dallas, Golden State, Denver and Utah are currently holding on to the three-six seeds – meaning, they’re safe – for now – from the play-in tournament, which is played by the seven-10 seeds.

However, between the Mavs in the number 3 spot and the Jazz at number 6, there remains much room for movement before the season’s end. Donovan Mitchell and company are just two-and-a-half games back of Luka’s crew.

The seeding in this bunch is going to be crucial, as matchups and home-court advantage depend on it. This group here is one to keep your eye on.

Pressure Mounting in the Depths of the West

This is just the second year of the NBA play-in tournament.

While it provides an opportunity for teams in the nine and 10 seeds who would otherwise have none, it mounts pressure on those in seven and eight.

The duress that comes with looming elimination games lies heavy on the bottom of the Western Conference playoff picture.

As it currently stands, the Timberwolves, Pelicans and both LA teams are the participants. Though, the Spurs are a win or loss out from being right there in the thick of it. Additionally, the Kings and Blazers have yet to be eliminated – albeit chances of sneaking in are slim.

Minnesota has had a great success of a season, finally thrusting itself into relevance after years of inadequacy. KAT actually has something to play for in the Twin Cities for just the second time in his career, and it is fun to watch.

The Pelicans, despite the Zion Williamson saga, are playing some great basketball since the acquisition of CJ McCollum and the return of Brandon Ingram from injury.

The Clippers, led by head coach Tyron Lue, have persevered through the absences of their only stars – Kawhi Leonard and Paul George – all season. Now, with PG returning from injury with a week-and-a-half to ramp up before the plan and rumblings beginning to persist about the return of the Klaw, the Clips are dangerous.

The Lakers are still alive, for now, and await the returns of LeBron James and Anthony Davis from injury to secure their place in the play-in.

Update: LeBron returned to Los Angeles to have his ankle evaluated further, and continue to get treatment, with team permission. https://t.co/EtZ9u51IoC

The Phoenix Suns and Memphis Grizzlies will finish as the one and two seeds, respectively, heading into the NBA Western Conference Playoffs.

The Dallas Mavericks, Golden State Warriors, Denver Nuggets and Utah Jazz will fight for the three-six seeds for the next 11 days.

The Minnesota Timberwolves, currently sitting at seven but still very much in play for the four spots above, will play to either escape the play-in or settle for their hold on the top play-in spot.

The Pelicans and the two LA teams essentially play nothing but playoff games for the remainder of the season, as each and every game matters in their claims to keeping the play-in spots they currently hold.

Finally, the San Antonio Spurs, Sacramento Kings and Portland Trailblazers cross their fingers and hope everything goes their way in the time remaining if they wish to live past April 10th.

It’s going to be an entertaining finish to one of the wildest seasons in the history of the sport. Can anyone beat the Suns? Who’ll have the chance? Regardless of how the seedings end up playing out, one thing is for certain: the representative of the Western Conference in the NBA Finals will have to have gone through an absolute gauntlet.

Zackary is currently studying Sports Journalism at the University of Florida. He has years of experience providing online content for various news outlets in every form, as well as experience running multiple sports-related social media accounts with high followings. He does work for WRUF / ESPN Gainesville by producing the radio broadcasts in addition to writing online content. Zackary's planned graduation is May 2024. Please feel free to contact via email at zackweiss48@icloud.com. Links to Zackary's social medias are directly below:
@zackweissespng
Previous Pat Dooley’s High Five (March 31st)
Next ESPN’s Greenberg Talks Final Four Predictions

After an impressive game two win in Miami, the Celtics lost game three on Saturday …