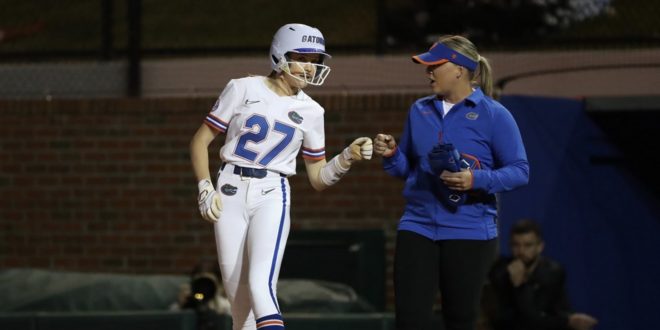 The seventh ranked Florida Gators softball team is headed to Auburn, Alabama. As Florida enters the second half of its regular season, there is still a lot of time to get some high-quality wins. This weekend, the Gators have an opportunity to take down yet another top-25 team as they take on the No. 17 Auburn Tigers.

Up-to-Date on the Gators

Last time out, the Gators demolished the UCF Knights 10-3. The team looked to its leaders and they delivered like they have all season. First, the Gators will be looking to Skylar Wallace. Florida’s biggest bat is hitting with a .434 batting average and has knocked out four homeruns and driven in 30 RBIs. Much like the rest of the season, Florida will be looking to Wallace for some big hits like her game-sealing homerun against Mississippi State back in mid-March.

Other than its powerful batting, Florida’s pitching has been quite stellar this season. The team’s ace, Elizabeth Hightower, has been throwing nothing but heat. With a 9-1 record on the season, Hightower has an ERA of 1.87, her second best on the team. With Florida’s pitching as a whole allowing less than twenty percent of its pitches to be hit, the Tigers batters will have their work cut out for them this weekend.

Continuing the homestand Auburn has had as of late, the team looks to discontinue its losing ways against Florida. The last five times the two teams met, Florida has emerged victorious. Looking for its first win in the series against Florida since 2005, the Tigers will be looking for the war eagle to fly high. Aside from the eagle, the Tigers will be looking to their young bats and experienced arms.

At the plate, Auburn will be relying on its freshmen to get on base — or around the bases. Auburn’s freshman class has smacked 26 of the team’s 54 homeruns this season. Freshman Bri Ellis, leads the team with 12 homeruns on the year. On the mound, Auburn will look to sophomore, Maddie Penta at some point this weekend. The right-hander from Maryland is second in the SEC in strikeouts with 152 so far this season.

Florida will first take the field against Auburn Friday, April 1, at 7 pm with the second and third games being afternoon affairs. The Gators expected pitchers for the weekend will be Hightower, Lexie Delbrey and Natalie Lugo. With this being Florida’s second SEC road series, the team is eager to secure big wins this weekend.