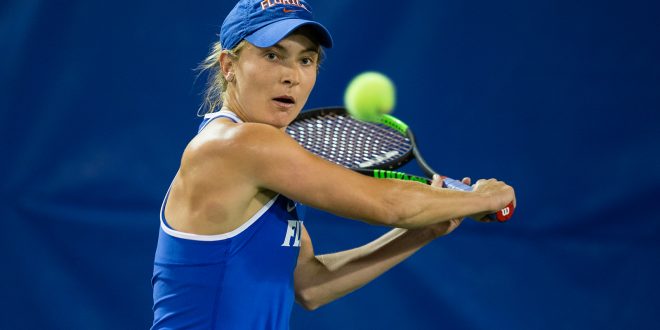 The Florida Gators women’s tennis team is in action this weekend, as they continue SEC play. The 16th ranked Gators head to Nashville, Tennessee this Sunday to face the 41st ranked Vanderbilt Commodores. Sunday’s matchup is set to begin at 1 p.m.

The Gators have had quite the season so far, having a 14-4 record and being 6-2 in SEC play. They are currently on a six-match winning streak and are ranked 16th in the nation. McCartney Kessler, graduate player for the Gators, is ranked as the 22nd best singles player in the nation. Kessler’s overall singles record this season is 14-5, and she is undefeated in conference play with a record of 8-0. She also just reached her 100th career singles victory.

The Gator’s doubles team consisting of Carly Briggs and Marlee Zein is currently ranked sixth in the nation. Their overall record together for the season is 16-8.

The Vanderbilt Commodores have had a season filled with some highs and lows. They began their spring season winning 6 of their first 7. However, they have currently lost 5 of their last 7 matchups and have posted a 10-6 overall record. In SEC play, they are 2-5 this season. The Commodores’ highest ranked singles player is Anessa Lee at 72. Lee has an 18-9 overall record this season. In doubles, Vanderbilt’s best duo is Anna Ross and Holly Staff at 76.

The Commodores are coming off a victory against the Kentucky Wildcats, and they take on South Carolina today before they prepare for the Gators on Sunday. They are 7-1 at home this season, so the Gators need to be ready to play.

Both the Florida and Vanderbilt women’s tennis teams would love a victory this weekend. It would improve their SEC record, as they inch closer to the SEC tournament in about 2 weeks. Florida is coming in on a six game winning streak, while Vanderbilt has won one after two straight losses. The Gators are the significantly better team and should come out with a victory if they play their usual brand of tennis.