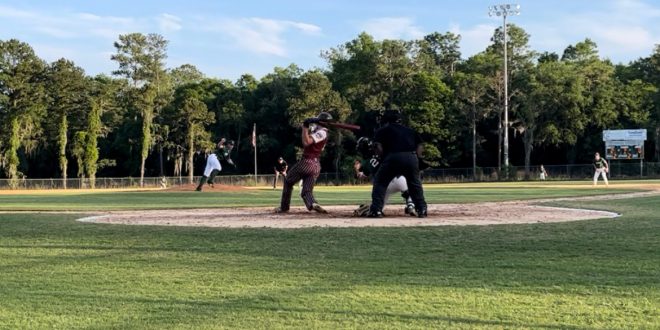 The Oak Hall Eagles have caught fire in the last few weeks. A 10-0 victory against the Eastside Rams on Friday night added to the team’s growing momentum. Jack Kuzmicki had another outstanding game at the plate, hitting his second inside-the-park home run this season. Kuzmicki also grabbed the win on the mound, allowing three hits, two walks and no runs in four innings.

The Eagles saw multiple players contribute across the board during Wednesday’s win. Harrison Beach secured his second multi-hit game of the season with two singles and an RBI. Jackson Beach and Ethan Szlachetka each stole two bases. Szlachetka also served as Oak Hall’s closer on the mound in the fifth inning.

Leading Off In Style

Oak Hall took an early 2-0 lead thanks to yet another big play from Kuzmicki. Jackson Beach kicked things off with a single in his first at-bat. Kuzmicki stepped to the plate and proceeded to blast a ball deep into the outfield. As the Eastside outfield struggled to corral the ball, Beach and Kuzmicki made their way around the bases. Beach soon made it home, and Kuzmicki was almost right behind him. By the time the ball entered the infield, both runners were already celebrating and heading back to the dugout.

Jack Kuzmicki again! With a deep blast to the outfield, Kuzmicki drives in Jackson Beach from second base and makes it all the way home for his SECOND inside-the-park home run of the season. Eagles lead 2-0 in the top of the first inning with one out. pic.twitter.com/kLDRhJSWAc

Head Coach Kevin Maris had plenty of praise for Kuzmicki in his post-game remarks. Friday’s game added to what has already been an impressive stretch for the Oak Hall junior.

“Jack’s just on fire,” Maris said. “He had an inside-the-park home run again and a triple, and to pitch the game he pitched tonight… He’s as hot as they come.”

As of April 1, Kuzmicki currently has a .650 batting average with 17 RBIs, four doubles and three triples. He has also maintained a 0.75 ERA on the mound this season, nabbing two wins in the process.

Building Up Their Lead

While the game slowed down a bit after the first inning, the Eagles maintained their control over the game. Kuzmicki and the Eagles’ defense faced multiple situations during the game where the Rams had runners in scoring position. At one point in the fourth inning, the Rams had the bases loaded with only one out on the board. However, the Eagles always found their way out of these jams. Kuzmicki threw two consecutive strikeouts to close the door on Eastside’s fourth-inning rally. He finished with five strikeouts on the day.

At the end of the fourth inning, the Eagles are up 4-0 over the Rams. Kuzmicki survives a scary situation with the bases loaded for Eastside, throwing two consecutive strikeouts to keep the Rams off the board. pic.twitter.com/vbOaVrIcNO

Meanwhile, the Eagles steadily added to their lead as the game progressed. After the team came up empty in the second inning, Harrison Beach scored on a wild pitch in the third inning. One inning later, Troy Freeman made the trek from first base all the way to home plate on a wild play. He confused Eastside’s defense when attempting to steal second base, leading to a miscommunication from the Rams. Freeman took advantage of the error and made his way home.

“My coach told me to stop halfway, so I did that,” Freeman said. “The catcher… overthrew it, I got to third and they made another error, and I went [home].”

At the end of the fourth inning, the Eagles held a 4-0 lead. While they had played well to that point, the team hit their stride towards the start of the fifth inning. After Harrison Beach was walked to start the inning, Kuzmicki hit an RBI triple that brought Beach home. Oak Hall’s next two batters were walked, loading the bases for the Eagles. Neil Ruth took advantage of the situation at hand in the following at-bat. He proceeded to knock a ground ball right past Eastside’s second baseman to drive in two more runs.

Oak Hall’s lead grows! A nice hit from Neil Ruth brings home Bear Wooley and Ethan Szlachetka to extend Oak Hall’s lead to 7-0. No outs yet in the top of the fifth inning. pic.twitter.com/a1UboowICX

At this point, the Eagles were rolling and ready to put the game away for good. The runs kept coming as the fifth inning continued. Emory Ezzell brought in a run via a sacrifice fly, while Brody Beaupre hit a line drive to bring Ruth home. To cap off a 6-run inning, Harrison Beach blasted a ball deep into the outfield for an RBI single to extend Oak Hall’s lead to double digits.

A Quick Conclusion On The Mound

As the Eagles’ defense took the field in the bottom of the fifth inning, they knew they were three outs away from another mercy rule. Szlachetka, who has recently served as the Eagles’ unofficial closer, replaced Kuzmicki on the mound. After an impressive performance against P.K. Yonge earlier this season that earned him Athlete of the Week honors from the Gainesville Sun, Szlachetka looked to put away another game for the Eagles.

While the stakes were not as high this time around, Szlachetka once again got the job done. A strikeout and a pair of groundouts finished off any chances of Eastside making a miraculous comeback. With just ten pitches, Szlachetka clinched the win for the Eagles.

When asked about how he stays locked in on the mound, Szlachetka noted an interesting approach he uses to keep himself motivated.

“I believe my pitching style is honestly kind of angry,” Szlachetka said. “When I get on the mound, I usually get kind of angry, and I think that helps me to throw a lot harder. I’ve heard that from a lot of MLB pitchers. They talk about getting really angry before [they pitch] so they can get adrenaline going and throw hard.”

Eagles win! A quick outing on the mound for Ethan Szlachetka caps off another dominant performance for the Eagles. Oak Hall takes home a 10-0 victory. This is the team’s fifth win in a row and third consecutive victory via mercy rule. pic.twitter.com/NUl9h9WhEr

A Busy Week Ahead

The Eagles have plenty of action coming up in their schedule. They are currently scheduled to play three games over a span of five days next week. The first of those matchups will be next Monday at 6 p.m. when they will visit the Union County Fightin’ Tigers. The Eagles will hope to keep their momentum going in what has already been the program’s best start to a season since 2007.

Jack Meyer is a first-year student at the University of Florida. He is majoring in Journalism and specializing in Sports and Media.
@jackmeyerespn
Previous Gators Softball Drops Game 1 to Auburn
Next Florida Baseball Drops Game 2 to Georgia 6-1; Loses Series to Bulldogs