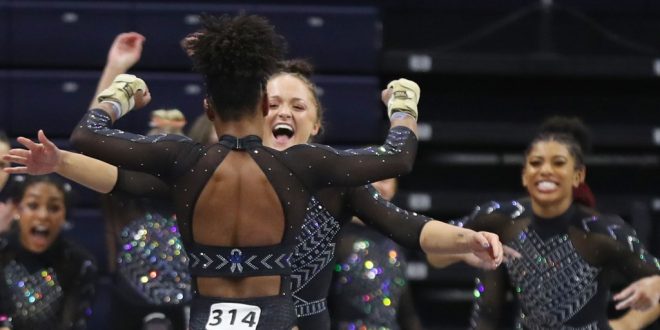 Florida Gymnastics Puts on a Show to Dominate Auburn Regional

Florida Gymnastics took the Auburn Regional in dominant fashion and will now move on to the NCAA Championships. The Gators took the quad meet against Auburn, Kentucky and Denver by a whole point with Trinity Thomas and Leanne Wong putting together huge all-around scores.

Florida got things started on the floor exercise and quickly established their championship ability.

Thomas achieved yet another 10.0 score on the event. She led the Gators to a 49.650 on the floor with Wong close behind with a 9.950. The rest of the squad that had scores count to the team total all received 9.900s.

Florida led the rest of the field by 0.275 after just one rotation.

It was a tough bars rotation for the Auburn Tigers who finished the opening round in fourth place.

After kicking her heels on the low bar, the reigning Olympic all-around champion, Sunisa Lee got a 9.725 which Auburn had to drop. It, unfortunately, meant that a 9,750 from Sophia Groth did go to the team score and Auburn found themselves down by 0.125.

Wong and Thomas, again, showed up for the Gators.

The dynamic duo each received a perfect score for their vault as the Gators flew ahead with a 49.700 in rotation two.

For the Tigers, Lee bounced back with a 10.0 on beam to bring Auburn back into the competition. A 49.625 on the apparatus placed the Tigers in second halfway through the meet.

Denver didn’t quite see the same success on vault that Florida did.

A 9.200 from Bella Mabanta put the Pioneers in a situation where they had to take a 9.750. Denver’s vault lineup managed to put together two 9.900s, but their 49.175 on the event put the Pioneers in fourth and the chance of moving on — out of reach.

Florida continued their dominance on bars. Megan Skaggs, Wong and Thomas each scored at a 9.950 or above. The Gators’ 49.675 created enough of a separation to effectively secure a trip to Fort Worth, Texas for nationals.

Standings Going Into the Final Rotation:

For a Trip to Fort Worth

It was going to take a huge rotation on the floor for Kentucky to come back and lock in a National Championship spot.

An early 9.025 from Arianna Patterson was given as a result of a fall on her last pass that put her out of bounds. The low score put the Wildcats behind schedule, but Kentucky was able to bounce back to a 49.575 on the event.

Florida’s 198.775 was the third-highest score in NCAA history. The Gators counted only two scores throughout the entire meet below a 9.900.

Auburn’s Lee took the beam title with her perfect score. Wong and Thomas won the vault title with their perfect scores. Wong also received the bars win with a 9.975. Thomas’ 10.0 on the floor and got her the event title while she also went to win the all-around, tying a career-high with a 39.900 while Wong was right behind her with a 39.875.

Florida and Auburn will now head to Fort Worth, Texas for nationals from April 14-16.

Chris Will is a second-year journalism student with a focus in sports and media. Originally from the Fort Lauderdale area, Will is now the beat reporter for Florida Gymnastics and covers all things sports in Gainesville.
@_Chris_Will_
Previous Florida Baseball Drops Game 2 to Georgia 6-1; Loses Series to Bulldogs
Next Gators Softball wins series v. Auburn